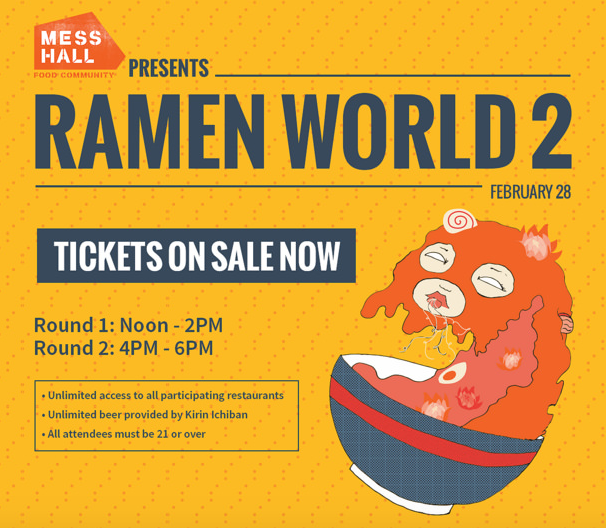 “Mess Hall – Washington DC’s premiere food incubator based in Brookland, is pleased to present ‘Ramen World 2’, a collaborative and community-driven culinary event taking place on Sunday, February 28th, 2016 featuring some of the area’s most celebrated chefs, restaurants, live entertainers, artisans, and most importantly – ramen masters. Two timeslots will be offered this time around for the event, with the first round beginning at Noon and ending at 2:00PM. There will be a break for chefs to reset and restock, and the second round will begin promptly at 4:00PM and will end at 6:00PM.

Ramen World 2 will highlight the same local noodle powerhouses featured last year, with some new additions: Ramen World co-founder Erik Bruner-Yang of Toki Underground is returning after a successful launch of his second H street restaurant, Maketto. Myo Htun of Chaplin’s is back as well, and will be joined by newcomers Jonah Kim & Mike Isabella’s shared Ballston eatery Yona. Patrice Cleary’s Purple Patch will also be included in this year’s line-up.

And returning to the ‘Ramen World’ scene is celebrated Chef Katsuya Fukushima of critically acclaimed Daikaya Ramen & Izakaya in Washington DC. Except this year with two upcoming restaurant openings in the books – Haikan and Bantam King – both slated to open this spring from Daikaya partners Daisuke Utagawa, Katsuya Fukushima, and Yama Jewayni –– Chef Fukushima and team will be offering the first ever ‘sneak slurp’ of Bantam King at ‘Ramen World 2’. Once opened this spring, Bantam King will be serving up Japanese chicken ramen in addition to Japanese fried chicken.

This event will highlight some of the most popular and renowned brands in the DC metropolitan area, in addition to fostering relationships between chefs, restaurants, Mess Hall’s producers, and the public. This collaboration embodies Mess Hall’s core values.

Read more →
More Stories
Jimmy John’s coming to 14th and U Street, NWYou can now have a Beer with your Pho at Pho 14