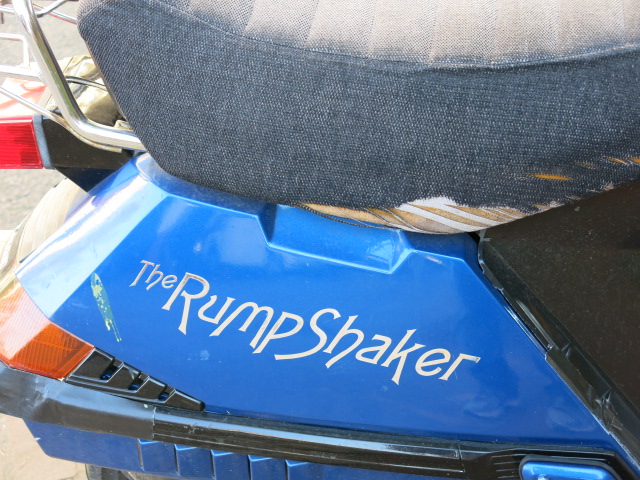 On Wednesday afternoon, two youths tried to steal one of my scooters (as seen on sweet city ride: the rumpshaker). I was coming out of the bathroom when I heard a small crash outside, and would have thought nothing about it except for that a friend had pointed out two suspicious looking kids pointing at the front of our house earlier in the day. I wasn’t there, so I cannot attest to whether the kids were suspicious looking or just pointing very suspiciously. When I ran to my bedroom window, I saw two teens pushing the scooter out of my back gate. I found them in the alley attempting to hotwire? the rumpshaker; however, all they did was figure out how to open the front storage area. Having just underwear and wool socks on, I gave them a good scare (as the sight of me in my underwear would), knocking one of the kids to the ground and doing my best to come up with curse words. They ran down the alley and I wheeled the scooter back inside and called the police who said they would “canvas the area.”

Not satisfied with the police response, I was still pretty pissed and decided to try to give chase and maybe increase the chances of the police finding these kids. Not being sure which direction the teens went, I decided to run toward McKinley school, not so much because it made sense, but because it was downhill. As I was coming up on the school, I realized that in the adrenaline rush and my attempt to make a sensible, profane-laced outburst, I wasn’t really sure what the perpetrators looked like. Luckily, as I was running down the street, a teen let out a prepubescent shrill–leading me to wonder if these teens were teens at all–and two kids shot out of a crowd and took off down an alley. Thinking that was pretty suspicious behavior, I called the police again and gave chase and stayed on the phone while I ran after the teens from neighborhood to neighborhood, doing my best to make up for my inability to string together a profanity-laced coherent thought from earlier. They eventually jumped a fence and ran into some warehouses by the CBT, and I gave up my efforts for a couple reasons: I’m old, I just did leg day at the gym, I didn’t have the appropriate footwear, etc…I slowly ascended the hill back up to my house feeling some sense of achievement for at least making the effort to enforce some sort of citizen justice.

However, the real reason for submitting this story to you is to iterate my complete lack of faith in the DC police. In the 45 minutes I was giving chase and the police were “canvassing,” I never once saw a police cruiser; nor, did the 911 responder discourage me from chasing the teens. Had I caught up to the teens (which I totally would have, given the proper footwear), I imagine it could have ended in only two ways, both which should have led the 911 responder to say something more than, “I’m updating your location,” to which I say, updating it to whom?

Also, this is not the first time that someone has attempted to hotwire one of my scooters. Granted, the brazen stupidity of these criminal masterminds entering someone’s backyard with the reckless abandonment of two elephants is shocking enough, but the hubris to think that you have the mechanical skills to hotwire a scooter? The last time someone attempted to hotwire my scooter, they literally tore out every electrical wire (even the horn) and it took needless hours to rewire them all. How many wires do you have to try to hotwire before you say enough is enough?

I can’t say that I am disappointed in the MPD. It’s like ordering a pizza from papa john’s and then realizing that your pizza sucks. I know what to expect. I am, however, extremely disappointed in the caliber of DC criminals nowadays. Also, I completely forgot to mention how difficult it would be to get a scooter that has been sitting all winter to start anyways. They woulda been at it for hours. Totally not well thought out.”