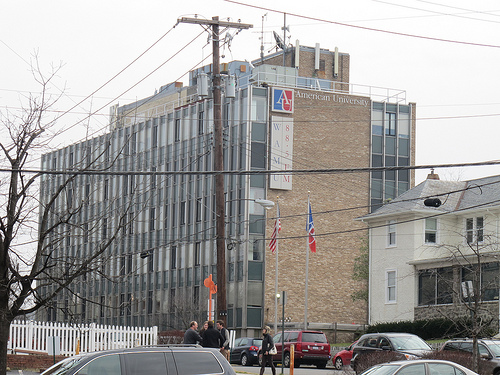 UIP plans to invest $75 million in order to gut-renovate the Brandywine and Wisconsin Avenue buildings, creating residential apartments, all within a block of the Tenleytown-AU Metro station on the Red Line and with an abundance of underground parking. The properties are:

1) 4000 Brandywine Street, NW (38,396 SF) has long been known as the WAMU Building, where American University housed its radio station and recording studios. Syndicated talk shows hosted by Diane Rehm and Kojo Nnamdi originated from this building, which is situated on the highest piece of land in the city. WAMU moved out in early 2013, and the building has been used for AU administrative offices and classrooms. AU will continue to occupy the building for about nine months.

2) 4620 Wisconsin Avenue, NW (59,996 SF) is the former home of TooJays, a restaurant that later became Krupin’s Deli and subsequently Morty’s, which closed in 2010. This building also is occupied by AU, which will stay in its space for about a year.

3) 4545 42nd Street, NW (39,299 SF), located at the intersection of 42nd Street and River Road, NW, was built to look like individual town homes or row houses, but is actually a single poured concrete structure occupied by a mix of commercial tenants. It will continue to operate as a commercial office rental property.

CapSource is providing acquisition and construction loans for the Brandywine and Wisconsin Avenue locations. MidCap Mortgage is the lender for 4545 42nd Street.

Bobby Meehling and Scott Frankel of CBRE represented the seller in all three transactions.

“We are more than excited to close on this acquisition and I want to thank everyone involved: American University, CBRE, and those at UIP who put in a lot of extra hours to bring this deal to fruition,” said Steve Schwat, UIP Principal and Founding Partner. “Brook Katzen, Pete Bonnell, and I have already engaged with many of the stakeholders in Tenley including Tenley Main Street and Ward 3 Vision. We look forward to working closely with our neighbors to help shape Tenleytown over the next few years.”

Named in the late 1700’s for local tavern owner John Tennally, Tenleytown surrounds the site of Civil War-era Fort Reno, built on the city’s highest natural ground at 409 feet above sea level. By 1900, the last remains of the fort had been replaced by a reservoir, water tower, and a park. Featuring sports fields, playgrounds, tennis, and more, Fort Reno Park remains a key community amenity.

The 1941 opening of Sears & Roebuck at Wisconsin Avenue and Albemarle Street was an important milestone in the neighborhood’s growth. The area’s first Hechinger store also was located in Tenleytown; after Sears vacated its store in 1994, Hechinger bought and moved into the property. Hechinger eventually shuttered all of its stores. By 2003, the former Sears/Hechinger site had been converted into one of the city’s first transit-oriented developments (TODs), Cityline at Tenley, which currently includes Best Buy, The Container Store, and Ace Hardware..