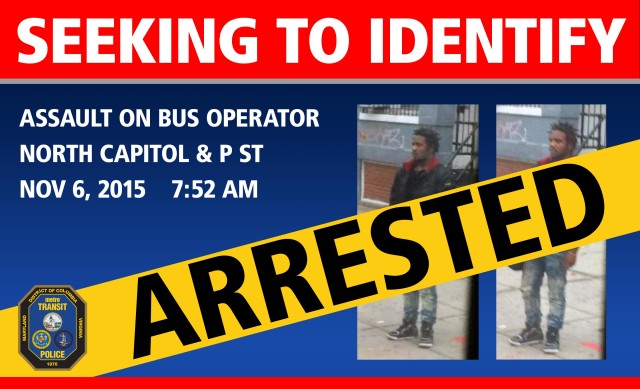 “Metro Transit Police have arrested the man wanted for assaulting a Metrobus operator on November 6, 2015.

Darren Lowell WEST, Jr., 20, of Northwest DC turned himself in to the Metro Transit Police warrant squad yesterday and was arrested without incident. Subsequently, West admitted to punching the bus operator because he was “angry.”

The incident occurred on the 92 route while the bus was servicing the bus stop at North Capitol and P streets NW. The suspect walked past the bus operator without paying. When the bus operator requested the fare, the suspect walked to the front of the bus and, without warning or provocation, punched the operator multiple times in the face with a closed fist. A passenger aboard the bus, acting as a Good Samaritan, had to physically pull West off of the operator and force him off the bus.

The operator was transported to a local hospital for non-life-threatening injuries and was released.

MTPD released images of the suspect within hours of the incident and sought the public’s assistance to identify him. Media coverage and public tips were instrumental in obtaining an arrest warrant for West.

West will face assault charges in the District of Columbia where, under DC law, assault on a bus operator could carry an enhanced penalty at sentencing.”