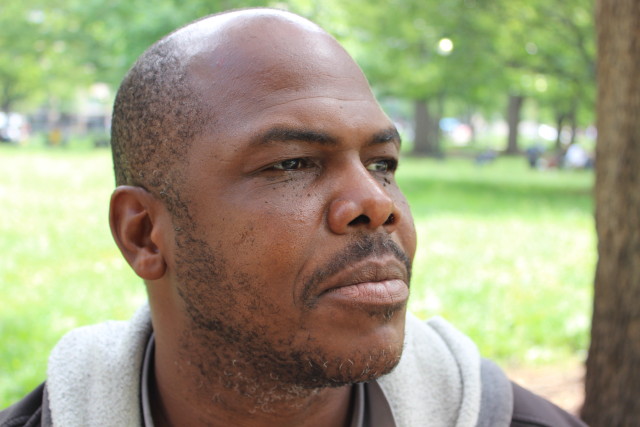 “I’m homeless. I don’t go to shelters… too crowded, too drug infested. Folks are dying. We just had a guy die in the shelter, you know, drug use. Young kids, mostly younger guys, they fall out and don’t wake back up. This happened yesterday. It’s not a safe environment. I think out here, it’s a little safer because there’s a group of us.

I’m proudest of holding onto my friends, what friends I got. I value my friendships. I’ve got a street family. It’s kind of hard to hold onto folks. They are homeless too. They don’t like going in the shelter – pretty much the same reasons. We sleep over there, at the [McPherson Square Metro] station. We celebrate the holidays together. We just make sure everyone has blankets, things of that nature. It’s a struggle. It’s a really depressing situation.

….
I don’t wanna be living on somebody else’s account. I’d like to try to get a job. I work a little bit off and on, but I don’t know, it just don’t add up. I’ve seen all kinds of folks out here, everybody got a story. Folks know you’re homeless, it’s kind of embarrassing at times when you don’t have anything. I got to the point where if I don’t have it, I do without.

I did landscaping, painting, bricklaying, things like that. I still do things like that, but it’s day work. I still do landscaping jobs now, like somebody’s house I know, I’ll go to and do the yard. That’s a good job because in the summer time that will be like three times a month. And moving furniture from a U-Haul to storage, two or three times a month. With day work, I make maybe $80, $85 tops a day for like three or four hours of work. That’s it. [Housing] is not affordable.

It will get you by, but I don’t wanna be like this for the rest of my life. My name has been on the housing list in Washington since 2002. I’ve been out here ever since. It’s a long list, I mean thousands of folks.

I was incarcerated for some time, almost a decade.”

Has having a criminal record been an impediment to getting a job?

“Yeah. It was a problem having a record. I would apply, and I wanted to say that I was, you know, convicted, because of a serious crime, a felony. So I would put that on there, and they would look it up, and then they act like they don’t want to hire you.

My felony charge was B&E [breaking and entering], when I was kid. I did that when I was a kid. I did the time though. Breaking into a house; it was nothing to be proud about. That was many, many years ago. I learned a valuable lesson from it. I guess as a kid I didn’t think like I did when I grew up. That’s time I’ll never get back.”

Richard has been homeless since 2002. He sleeps at the McPherson Square Metro stop.

More Stories
Random Reader Rant and/or RevelSCRAP DC closing in Brookland “Just like in nature, we will lay low until the Spring.”