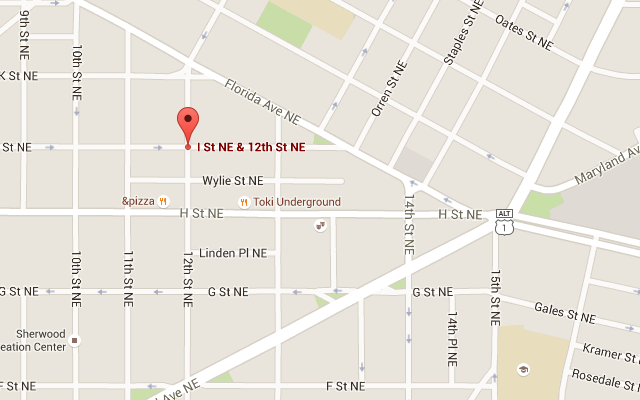 My wife was in a fairly bad bike accident this morning. Details to follow. I’m posting to thank the guys who helped her and ask if there were any other witnesses who may have seen the car involved.

She was biking to work this morning (Nov. 5, around 8:45 a.m.) and as she turned right from 12th St. NE onto I St. NE, a car pulled out from an illegal parking spot into her path without warning. She hit the brakes and her bike went out from under her. She landed on her left hand and right arm. A man in a white pick up truck asked if she was OK. At the time she thought she was just bruised and said and said yeah so he moved on. Two men helped her get her bike out of the street onto the sidewalk, which is when she started to think she had broken her left wrist. The car that caused the accident did not stop, it just proceeded to turn right on 12th St. NE heading south.

I Street Northeast is a one-way with a contraflow bike lane. The car had been parked on the left side of the street in a spot that is crossed out and not meant for cars to use. She believes the car was a gray Prius, but didn’t get the license plate number.

We filed a police report and went to the hospital in an ambulance. She has not only a broken wrist, but a fracture in the elbow on the other arm. We are looking for anyone who may have seen the accident itself, or a gray Prius-like car going south on 12th St. NE a little after 8:45 a.m. any witnesses to this accident this morning. If you did see anything, please reply to this e-mail. We also want to thank the people who helped her again. This could have been even worse.”