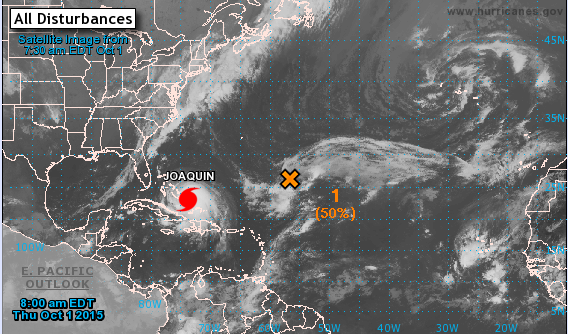 “Yesterday, Mayor Bowser was briefed by the District’s Homeland Security & Emergency Management Agency (HSEMA) and District leadership on the forecast for Hurricane Joaquin and the District’s preparedness. HSEMA is holding twice daily briefings with the National Weather Service and agency directors on storm preparation.

This morning, Mayor Bowser hosted a call with HSEMA and senior leadership to discuss the District’s efforts.

Starting Friday at 4:00 PM, the District will ramp up response operations at the Emergency Operations Center (EOC) at HSEMA.

The Bowser Administration will continue to monitor the weather events, provide updates to the public and evaluate assets for the preparedness and response operations.”

“Though key details on the final track of the powerful hurricane remain in question, one thing does look certain: extreme rainfall totals are likely for large parts of the Eastern Seaboard, if the storm tracks close to the coast or inland.”

Though they note the National Hurricane Center reports:

“Confidence in the details of the forecast after 72 hours remains low, as there have been some large changes in the model guidance overnight. The range of possible outcomes is still large, and the possibility of a hurricane landfall in the Carolinas still cannot be ruled out.”