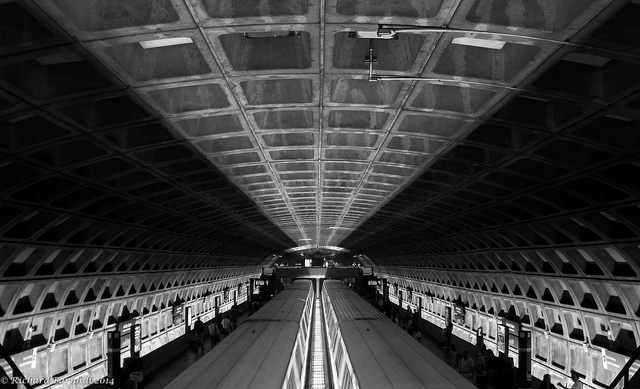 “Two Metro employees are being called heroes this weekend after subduing a robbery suspect armed with a loaded semiautomatic handgun aboard a Green Line train.

The incident began shortly after 4 p.m. Saturday when the victim, an adult male, was approached by the suspect at Anacostia Station. The suspect flashed a gun in his waistband and demanded the victim’s money. The victim complied and handed over approximately $40.

The suspect then boarded a northbound Green Line train where he got into an altercation with other passengers. Two Metro Rail Operations employees–one male and one female–were riding aboard the train, noticed the altercation and attempted to intervene. After a struggle, the male employee was able to restrain the suspect by pinning him to the floor of the railcar while the female employee radioed the Rail Operations Control Center to dispatch Metro Transit Police.

During the physical altercation, the male employee noticed that the suspect was reaching in his jacket pocket. The employee asked the suspect, “Do you have a gun?” When the suspect responded “yes,” the employee grabbed the weapon and placed it out of the suspect’s reach on the floor of the train.

“I could not be prouder of the courageous action taken by two of our colleagues yesterday afternoon,” said Metro Interim General Manager Jack Requa. “Faced with an armed suspect, they selflessly sprung into action and may well have saved others from harm.”

Metro Transit Police intercepted the train at Gallery Place where officers placed the suspect under arrest and recovered a 25-caliber semi-automatic handgun. The weapon was fully loaded with one bullet in the chamber.

Green and Yellow line trains were single-tracked around the police investigation for about 30 minutes.

The suspect is identified as Rondez Trayvon Tibbs, 20, of Southeast Washington DC. He is charged with armed robbery and carrying a pistol without a license. Additional charges are possible.

The employees have not been identified.”