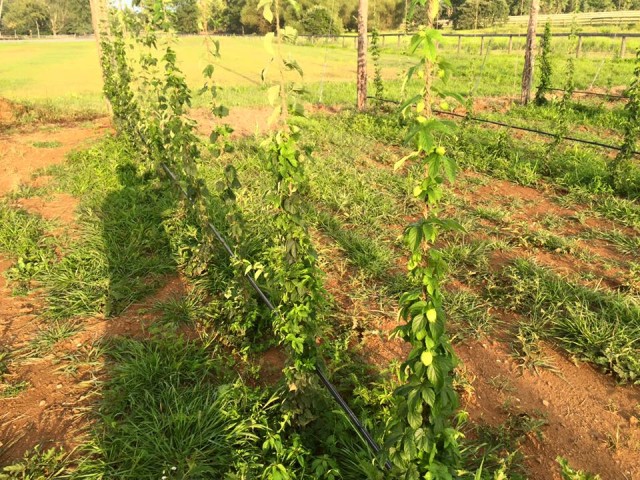 Photo via B Chord Brewing Company

Thanks to all who forwarded this painful read – hoping B Chord Brewing Company prevails!

“how did it go yesterday? Terrible. Awful. Disturbing. All words that describe what is happening to us. Apparently we have become ground zero for the fight over farm breweries in Virginia and agriculture tourism in Loudoun County.

When I met with Loudoun County officials repeatedly in the Fall of last year to discuss my brewery plans they indicated that it was exactly what they had envisioned would be an idea Farm Brewery for Loudoun. The Loudoun Board Of Supervisors overwhelming voted to pass the zoning ordinances enabling Farm Breweries in January. They made the rules and they passed them. The Economic Development folks strongly encouraged us to proceed and offered any help they could bring. I worked closely with the Counties Economic Development Team, The Zoning Department and the Health Department to address issues and potential problems that they had learned about from some of the other breweries that have already opened. In fact, many of the County employees indicated to me that we were a “model for how this should go”. The County added us to the Go Loudoun brewery farm trail and publicly supported our Brewery along with the other already opened farm breweries. Plenty of politicians also indicated that they supported farm breweries and would be happy to see us open. A few visited the farm to show that support. Over the course of the summer we built a 1 acre hops yard growing 6 different hops varieties. We received lots of help both from the county and from the state with our initial hops plantings etc. We invested over $100K on site development work like grading, parking area and even a commercial septic system. We continued to built out or brewery and at the appropriate time we filled for our ABC Brewery license. We expected to be open by now.

Everything has now changed.

A handful of self righteous people that live around the farm have decided that they will single handedly undue the SB430 that enabled the Farm Breweries and will overcome Loudoun’s zoning laws so that they can keep their corner of paradise to themselves. They don’t care how much money it will cost and they are prepared to destroy people lives in order to get what they want. They have decided that the laws are vague enough and can be left to interpretation to the point that they could push their desire for no ABC licenses in rural areas to the courts. As an example, VA law says that a license should not be granted if it is determined it would ruin the quietude of an area. One of my neighbors is claiming that 5 cars passing his house ruins the quietude of his area. Another example is the law says that a license may be denied if there are to many licensed establishments in the area. One of the neighbors claims that 2 operations is to many and that ABC must deny our license. Their lawyer and one of the objectors paying for this assault told VA ABC yesterday that they intend to go all the way to the supreme court to undue the laws that allow breweries and other ABC licensed businesses in rural areas.

Yesterdays pre hearing meeting went over 4 hours and left everyone frustrated. The objectors hassled everyone and even though ABC has bent over backwards to accommodate them they continue to be rude, obnoxious and unprofessional in their public appearances. They are unbelievable arrogant. They have made it clear that they believe their $$ speak louder then our laws.

Now, add an election to the mix and you have a perfect storm. The Objectors decided that they could create a panic through the county and launched a false, misleading and slanderous public relations campaign against us and farm breweries. They mailed out 5500 postcards to western Loudoun residents and ran full page newspapers ads proclaiming that farm breweries would ruin Loudoun and affect the publics safety. They made unbelievable statements about farm breweries draining the aquifer and that streams would flow backwards leaving nobody with water in western Loudoun. The told everyone that farm breweries are actually bars and that we would be open till 2am with outdoor stadium lighting. As you can imagine the intended panic did happen and it became a circus. Numerous newspaper stories and even TV reports where published describing the “fight” the objectors had launched.

Unfortunately, when the public received the inaccurate and slanderous information they started calling every government official that would take their calls. Every single dept of whatever was called and we started to get calls and visits from these agencies. Once again we complied with all request and followed all requirements. We remained a model for how this should go. We expected the politicians that supported the brewery and passed the zoning legislation to support us. We found out the hard way that they flipped immediately when they started to receive this inaccurate information. No calls or visits to us or any other farm brewery to determine if the information being passed around was accurate. They just flipped. At this point if they have not already run for the hills the have made it clear they don’t support form breweries any longer. I cannot find one politician who will stand up right now and tell us they support farm breweries. That is disturbing. I heard from one of them yesterday that they intend to re-write SB430 and require hundreds of acres of land to have a farm brewery and that there would be no grandfathering- so if you don’t have required hundreds of acres you will be SHUT DOWN.

Friends and supporters- we are under full attack and at this point have no or little support from the government officials that encouraged us to go down this road. What can you do? We need everyone that believes in what we are doing to get on the phone and start sending emails to their representatives at the state and local levels. We need your help to make sure the politicians and the public get the correct information about about breweries, wineries and other agro tourism business. If they are able to undue SB430 and the county zoning by simply spending their $$ to scare the hell out of everyone it will be a travesty and serious setback for anyone that thinks they can have a business in a rural area of Virginia.

We also need as much support as possible at Monday’s hearing. You won’t need to speak but just showing up in overwhelming numbers will help to send the message to ABC and the politicians that these handful of people do not speak for the community.

Thanks for your help and stay tuned for updates.

I have received word that ABC has postponed our hearing scheduled for Monday due to a number of objections about the hearing process raised by the the objectors. I will provide an update later today after we have a call with ABC to get more details. Stay tuned.”