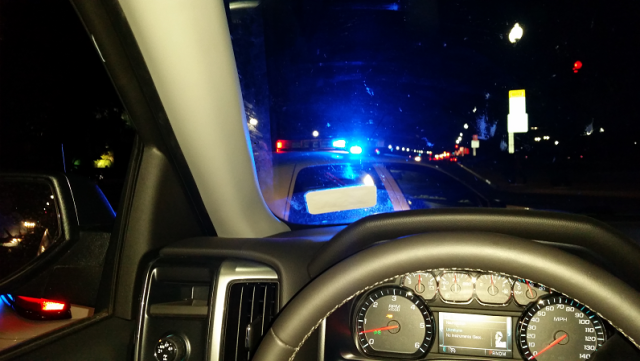 The story starts in Harrisonburg, VA today. I was out riding my motorcycle in West Virginia all weekend and I load it up onto my trailer. I pull out onto the interstate and looked in my rear view mirror. I notice the license plate zip tied to my trailer barely holding on. I pullover and notice that all the zip ties have failed except for one. When I left from DC on Saturday, they were fine. I guess this trip was the moment they decided to get brittle and fail. I cut the remaining zip tie and bring the plate inside my truck for safe keeping, with plans to reattach when I get home since I don’t have any zip ties with me.

I drive back to DC and enter the District and am on Constitution Ave. I’m in the middle lane and there’s traffic on all sides of me. All of a sudden I notice an officer from the U.S. Park Police put his lights on as to motion for me to pull over. I can’t pull over because of traffic. So I stop and stay put. As soon as traffic clears around me, I pull over immediately to the right.

Officer from Park Police pulls over and immediately pulls in front of me as if to block me in. He gets out and immediately begins to accuse me of trying to “run” from him. Apparently when I was pulled over in the middle lane of Constitution he had gotten out of his car and was approaching me. I don’t know, I didn’t see him, it was 8:30 PM at night, and that part of Constitution is not well lit. He accuses me of making “eye contact” with him in my left hand rear view mirror, but I have no idea what he’s talking about and I tell him so.

Anyways, I ask him why he’s pulled me over, and he says he can’t see the license plate on my trailer. I say to him, “I have it right here, it almost fell off earlier today so I brought it in, I’m about to go home and reattach it”. I reach over to grab it and he pulls a gun to my head. Fortunately he doesn’t fire it. After wasting 20 minutes of my time, he comes back with a ticket for “improper display of license plate”.

This officer is a danger to society. Nobody should have a gun pulled to their head in a routine traffic stop.

I can’t quite make out his name on the ticket, but his badge number is 976.

As soon as I got home tonight, I reattached the plate to my trailer.

This most likely won’t even go to court. The ticket is a standard DC MPD ticket, which will be adjudicated through the DMV. For these kinds of tickets, if anything is fishy, the examiner usually dismisses them without a court appearance, I plan to submit the above story along with a photo of my tag mounted properly on my trailer. I give it a 90% chance of being dropped. I still plan on going down to Hains Point today to file a complaint with the Chief. I’m not concerned about the fine, just the complete lack of professionalism exhibited on the part of the Park Police.”