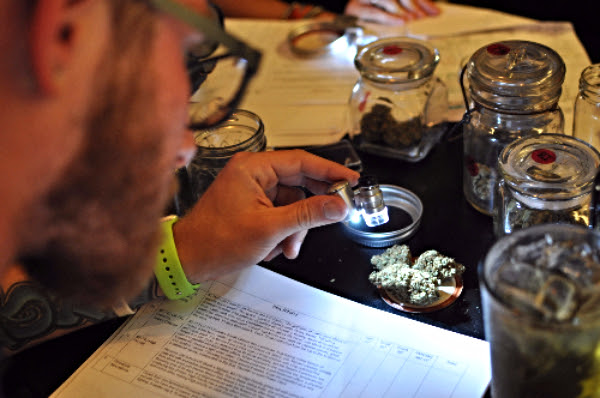 Alex Jeffrey, executive director of DC NORML, examines one of the entries. (Photo by: Joe Morcos) via DC State Fair

Earlier this morning we talked about all the neighborhood festival action happening this weekend including the DC State Fair. Just got the following email which just felt so surreal to me, awesome, but surreal:

“For the first time ever, the DC State Fair, now in its sixth year, will host a marijuana growing competition: The Best Bud Contest. This is also the first time a state fair has ever successfully hosted such an event.

Fifty-six people registered to compete in the much-buzzed-about contest. The contest is a concept of Fair board members and Frank Asher, the owner and founder of Old City Farm and Guild.

The DC State Fair will be held on September 12, 2015, from 12 noon to 8PM at the Old City Farm and Guild located at 925 Rhode Island Ave NW. This year is the first time that the annual Fair, which has traditionally partnered with other neighborhood or arts festivals, will be held as a standalone event.

Judges will critique the buds based on a variety of criteria:

Appearance: Is it well manicured? Does it have Trichomes (sparkling crystals)?
Odor: What does it smell like? Does it have a sweet, spicy, or musky smell?
Touch: Is it sticky? Does the stem snap or bend?
Your Story: Did you grow your plant organically? Did you use artificial light, natural light, or a combination? Was the plant grown hydroponically or in soil?

No one will smoke or ingest the buds for judging or recreation during the competition.

The Best Bud entries were first examined in a preliminary round of judging that took place on September 5. Photos and video from the day will be made available to press upon request.

The final round of judging will take place at the Fair on September 12 at 4:15 PM.

“In my 25-year experience in the landscape trade, I have found that cannabis growers are more passionate about their plants than growers of any other types of plants. This contest is sure to grow,” said Perry.

The DC State Fair is hosting more contests than ever this year, adding compost, best bud, and cut flower contests to an already extensive list. Traditional contests such as pie-baking, honey, heaviest fruit and veggies, and pickled foods will also be held. The ice cream contest last year was a big hit, and the Fair is bringing it back this year, along with the long-time favorites, tastiest tomato and homebrew.

The five bud finalists for the contest are: