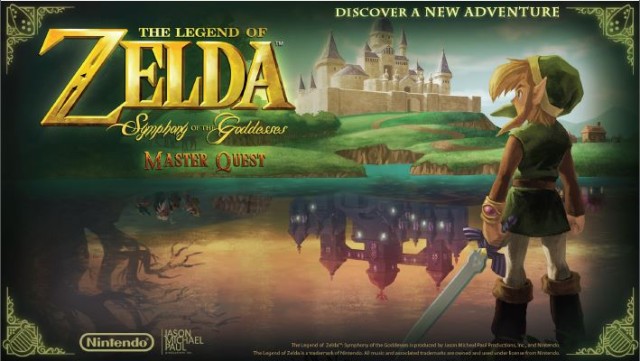 The Legend of Zelda:
Symphony of the Goddesses – Master Quest:

Symphony of the Goddesses brings Zelda fans and symphony goers alike an entirely new, exciting multimedia experience presenting over 28 years of music from The Legend of Zelda franchise as never before.

Fans will relive all of their favorite moments from a fully developed and thoughtfully structured program including memorable, beloved melodies from titles including Ocarina of Time, The Wind Waker, Twilight Princess, A Link to the Past, Link’s Awakening and more.

This concert will run approximately 150 minutes.

This concert is not presented by Strathmore.”

A Symphony Fit for the Goddesses

Designed to be a journey as epic and thrilling as the Legend itself, The Legend of Zelda: Symphony of the Goddesses presents the music of this celebrated franchise with all-new arrangements directly approved by franchise producer Eiji Aonuma and Nintendo composer and sound director Koji Kondo (Super Mario Bros., The Legend of Zelda).

Featuring a first in video game concert history, The Legend of Zelda: Symphony of the Goddesses has been arranged and programmed with classical sensibilities in mind, organizing the music of this beloved franchise into a complete, 4 movement symphony, worthy of the Hero of Hyrule himself.

via google maps From MPD: “Detectives from the Metropolitan Police Department’s Sexual Assault Unit announce an arrest has been made in an Assault with Intent to Commit First-Degree Sexual Abuse…