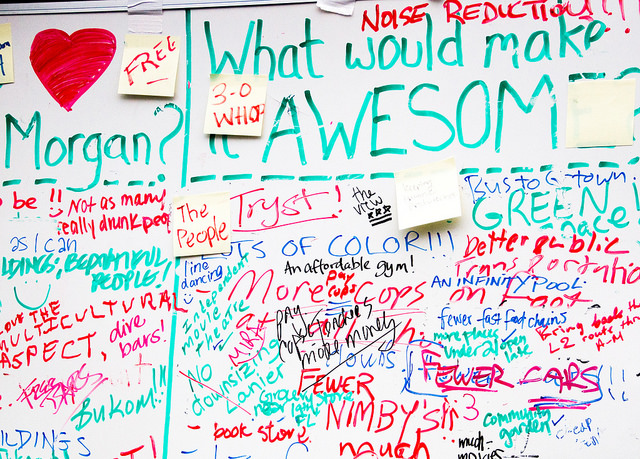 Rest up Friday night because Saturday is fixing to be epic (and damn you naysayers – show Adams Morgan some love on Sunday too.)

The end of summer street party is almost here! Join us for the 10th annual Columbia Heights Day, a festival celebrating the diversity of, our community and its many vibrant businesses.

The fun starts with Columbia Heights’ food vendors, a beer garden, and live music. Then get to know some of the great causes organizing right here in Columbia Heights. Themed tent areas let you explore the world in our cultural section, check-out the beautiful work of local artisans, and take a moment to focus on your health and wellness. For the truly adventurous, we challenge you to run through our version of an adult warrior obstacle course, including a moon bounce! Families can also enjoy the festival together at the Bloom Bar Fun Tent and at our Fun Field (located on Harriet Tubman Elementary School yard). We will see you on Saturday, September 12!

“On Saturday, September 12, 2015, the Columbia Heights Neighborhood Festival will take place in the District of Columbia. In conjunction with this event, the following streets will be closed from 6:00am-8:00pm:

“The sixth annual DC State Fair will be held on Saturday, September 12, 2015, from Noon to 8PM at Old City Farm and Guild located at 925 Rhode Island Ave, NW. For the first time in the DC State Fair’s history, it will be held as a standalone event to showcase the District’s food, culinary, and artistic talent.

“Old City Farm & Guild is thrilled to have the DC State Fair back for another year, said Frank Asher, Owner and Founder of Old City Farm and Guild. “The Fair is a leading example of what DC can be in regards to community, to neighbors coming together, and represents what kind of people and good citizens we have within the District. The overlapping missions of the Fair and Old City make this venture and partnership a great thing.” The mission of Old City is “where people and plants come together.”

The DC State Fair is hosting more contests than ever this year — adding Compost, Best Bud, and Cut Flower contests to an already extensive list. Traditional contests such as Pie-Baking, Honey, Heaviest Fruit, and Pickled Foods will also he held. The Ice Cream contest last year was a big hit, and the Fair is bringing it back this year, along with the long-time favorites: Tastiest Tomato and Homebrew.

Throughout the day, attendees will be able to enjoy events on the main stage — including the judging of the DC State Fair Pie, Homebrew, and Best Bud contests and the announcement of all winners. The Fair has also lined up performances by DC’s Hand Dance Association, the YMCA, Lennon English and the New Soul Republic, Near Northeast, and much more. Local deejay Mary Nichols, a.k.a. DJ Fusion, will keep the music flowing in between mainstage events. For the first year ever, the Fair will have an Educational Tent, where craft, gardening, and cooking demos will take place all day.

The final band of the day, Near Northeast, is a DC-based music project that has been writing tunes since 2014. The band members have roots across the globe, and the resulting musical influences come everywhere from Latin America to the Middle East to Appalachia, and the band mixes folk ballads with post-rock soundscapes while incorporating effects, harmonies, and the occasional ukulele and cajon breakdown.”

“The Metropolitan Police Department and the Department of Transportation would like to inform the public of street closures in conjunction with the 6th Annual 17th Street Festival scheduled for Saturday, September 12, 2015.

The following streets will be closed from, Saturday, September 12, 2015 at 10am through 8pm

And don’t forget SnallyGaster beer festival extravaganza is at the Yards on Saturday too.

“The naysayers said there would be no Adams Morgan Day in 2015, but the local businesses and residents of Adams Morgan said otherwise. The neighborhood has banded together to revive the longest continuously running neighborhood festival in the nation’s capital. The 2015 Adams Morgan Day celebration will take place Sunday, September 13, from noon to 6pm, along 18th Street NW and Columbia Road.

So here comes Adams Morgan Day. Here comes the neighborhood. Out goes the meat-on-a-stick. In comes the hyper-local events hosted by the businesses lining 18th Street and Columbia Road and neighborhood volunteers.

“This is a festival powered by volunteers. Each resident and business is volunteering their time, energy and in some cases, their own finances. The Corinto Gallery, for example, volunteered to design our 2015 Adams Morgan Day logo and t-shirts,” says A. Tianna Scozzaro, a local resident who is volunteering as lead coordinator for the festival.

This year’s festival will be different. 18th Street will remain open to traffic. Many of the visual artists who used to be found at Arts on Belmont will display their work inside restaurants and businesses along 18th Street and Columbia Road. Local bands will grace impromptu stages at The Brass Knob, Libertine, Roofers Union and The Black Squirrel, among other locations. And area restaurants will provide the street food instead of outside vendors.

Some things will stay the same. The SunTrust Plaza at 18th and Columbia will feature performances by bands on the new Spotluck Stage, with acts being organized by Songbyrd . The Adams Morgan Partnership BID will staff a table with maps on the opposite corner next to the Adams Morgan “Festivus” kiosk and pole. The Dance Pavilion and Children’s Center will take place on the Marie Reed Community Center playground and tennis courts.

· Capitol Hemp will sell products at the Amsterdam Falafelshop

· Local artists will sell their work at Mellow Mushroom, Angles, Toro Mata and The Black Squirrel

· Make your own tie-dye t-shirt at The Blaguard

· Puppy adoption with the Humane Society at Tryst

· Free pops at Pleasant Pops to the first 300 customers, starting at 2 p.m.