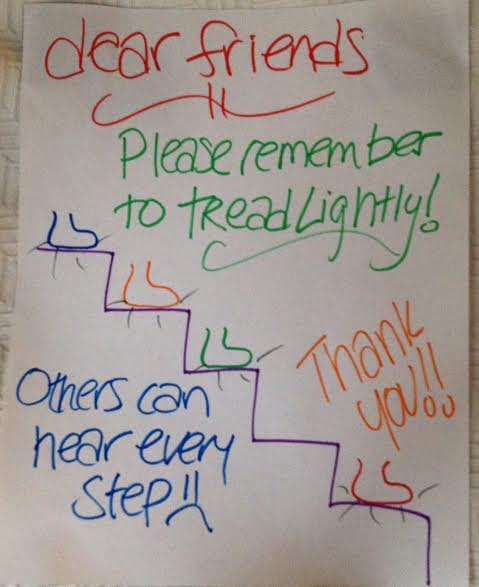 I am writing to share with you the ongoing frustration my roommates and I endure at the hands of an irrational neighbor. We have lived above her for about a year and a half, and she is constantly complaining, or suggesting things we should do differently. Almost every complaint we have received since moving in has been either trivial, irrational, or both. This neighbor is the queen of passive aggressive text messages, emails, and even the occasional hand drawn sign (see above).

She actually hung that sign on the banister next to our front door and expected us to leave it there to inform guests, and even the mail carriers, that we are all being too loud on the stairs. Aside from not “treading lightly” when entering and exiting the house, past complaints have included “we can hear you closing doors and flushing toilets” (seriously?), a bike being parked in the backyard that is a “fire hazard and an eye sore”, and she even blamed us for some illegal dumping of old furniture that occurred in HER parking spot, and instead of asking if it was us, she just assumed that it was and went ahead and contacted our management company about it behind our backs. The list goes on and on.
​
After many many months of trying to be neighborly and just sucking it up and conceding to her ridiculous demands, I finally lost my temper this weekend. She sent me a text on Saturday morning to let me know that a car was blocking her ability to get out of her spot, in the attached picture, her car is the grey one. the screenshot of the text messages shows the conversation that occurred between us. 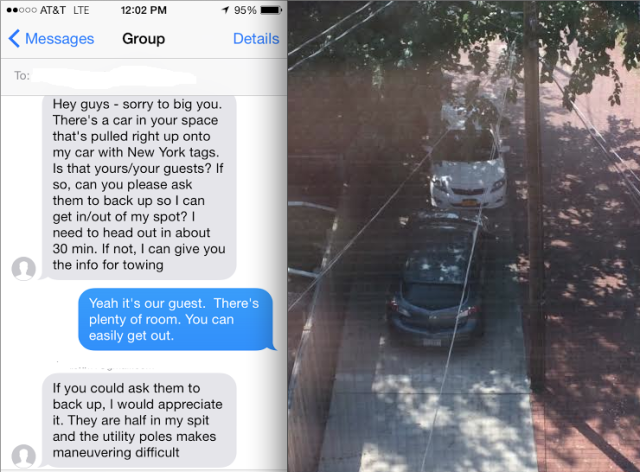 This picture was taken at the time of the incident, she clearly has plenty of space to back up a few feet and easily pull out of her spot. Before I even got the chance to read her response to my message, she was angrily knocking on our door to yell at us to move the car immediately. I lost my temper. I told her there was plenty of space and that as a matter of principle I would not move the car. I then told her I would go out there and move HER car for her. She obviously didn’t like that idea very much. After this, voices were raised, obscenities were thrown around liberally, and my roommate who is much more patient than I am said he would move the car. My roommate received a passive aggressive thank you, doors were slammed, and that was the end of it.

Please, PLEASE, for the sake of my sanity tell me that this is absurd. I could have given the keys to an 8 year old and watched them pull out of this parking spot with ease. Its not like she attempted to get out and couldn’t do it, she just looked at the cars and decided it wasn’t possible. Why create all this drama? I simply contributed to the drama myself because I’m sick of these absurd demands. What’s her excuse? I think that she, since she owns her unit and we rent ours, just gets some sick satisfaction out of telling us what to do. For me, this was just the straw that broke the camel’s back and I just couldn’t let her get away with it.

Who is being unreasonable here? Me or her? How does one deal with this type of nitpicking? I mean, pick your battles, right? At this point I’m just going to tell her to send her complaints to my more patient roommate, or directly to my landlord. Dealing with her directly is affecting my blood pressure, and my overall mental health.”