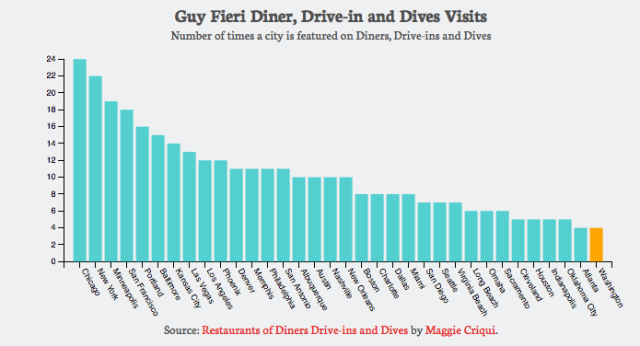 Guilty pleasure confession: One of my favorite shows is Diners, Drive-Ins and Dives. If you’re uninitiated it’s a show where 90’s emoji Guy Fieri visits restaurants around the country. I can’t be sure what it is exactly – how Fieri bleaches only the inner bit of his goatee or unironically uses phrases like “that’s killer!” and “off the hook!” – but if I’m in a hotel room there’s an 85% chance that show is on.

After an embarrassing number of hours spent with Food Network however, I’ve become disappointed with how rarely Guy Fieri visits my city. Across 22 seasons Guy Fieri has been to DC only four times. And it’s not like he hasn’t been in the neighborhood. He’s been to fifteen Baltimore restaurants and visited Virginia Beach, a city two-thirds the size of DC, seven times. So what’s Guy Fieri’s DC problem? 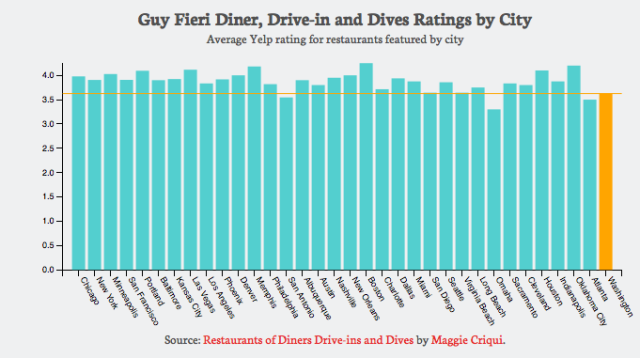 But I think there’s more to it and the lack of Diner, Drive-ins and Dives visits actually reflects a few things about the DC food scene. Much of the show is dedicated to community favorite cheap eats, mom and pop diners, and cultural food institutions. DC frankly doesn’t have a high proportion of any of these due to it’s more transient population and traditionally more of a focus on lawyers who lunch as opposed to casual cheap eats.

That has been changing as more people stay in the District longer and a more vibrant food culture takes hold through food trucks like Puddin’, cheap eats like Fast Gourmet and nationally acclaimed spots like Rose’s Luxury.

Of course this isn’t to say DC lacks great food. As Maggie Criqui shows, Guy Fieri’s unending restaurant enthusiasm doesn’t exactly hold up to Yelp. And on the upside, at least we know for sure Guy Fieri won’t be opening one of his infamous restaurants here anytime soon.

Want to take a tour of the spots Diners, Drive-ins and Dives has visited in the area? Check out the map below:

Technical notes: Data and graphics shown are based off Restaurants of Diners Drive-ins and Dives by Maggie Criqui, which was presented at great local group DC Hack and Tell. You can find complete code for this post on my github page.