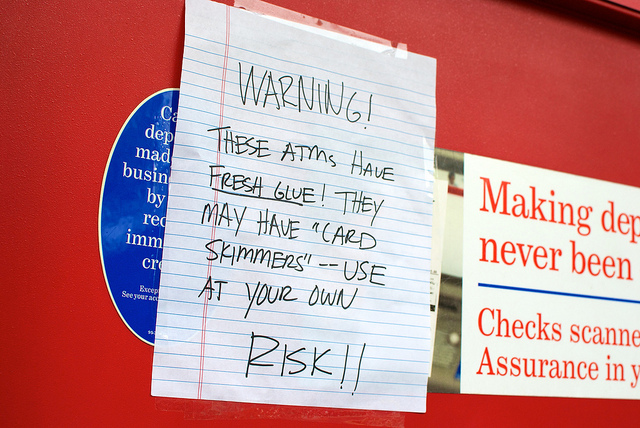 Last night I visited a grocery store in a nearby neighborhood [I don’t want to put them on blast because I love the store, and because I don’t know if they are to blame] for a few things, paid using my credit card, and went about my evening.

This morning, I happened to log into my cc account and noticed two pending fraudulent charges on my account. My first thought was FU-K! Finally, my card has been hacked from one of the numerous stores/banks/etc that’s been hacked in recent years. Then I looked into the charges and realized they were both from places within 0.5 miles of the grocery store I visited last night. My immediate assumption- someone stole my info at the store. My knowledge of credit card thievery is naive, to say the least, so I have no idea if I should be blaming a fellow grocery-goer for swiping my card info with one of those magic card swipers I’ve heard about, or if the person who checked me out had something fishy going on. But I hadn’t used that card anywhere else in the area for a few days, and the proximity of the fraudulent charges just seemed like the grocery store (or someone who was there) was the likely culprit.

I already cleared everything with my bank, have a new card on the way and wanted to pose a question to PoPville. How far would you go in trying to determine the cause of the fraud? I called the store just to let them know what happened in case they want to look into it- maybe their system was hacked last night. They suggested I call the other businesses to look into the person(s) who made the fraudulent charges- maybe they were caught on tape, and maybe they are an employee of the grocery store I visited.

Part of me doesn’t want to get anyone in trouble. But on the same token- fu-k that! I also don’t want this to happen to others. Would you guys look into it further or just be happy that you settled everything with your bank? Honestly, this is not coming from a place of vindication, and really just because it seems like such a local instance of credit card theft that could be easily prevented from happening again.”