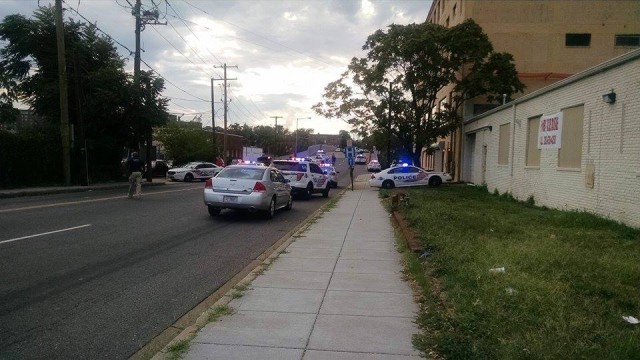 A reader reported earlier from the scene in:

“Brookland/Edgewood – Franklin Street between 7th and 10th St, NE. It is a disaster. Can’t pass through 30 + officers blocking.

Helicopters and at least 25 cop cars, probably around 40 officers and k9s on the bridge on Franklin between 10th and 7th street. Can’t cross the bridge/walking or driving. All traffic having to divert. I had to bike a completely different way home.

They were looking down toward the NoMa side of the bridge ..not so much toward the Brookland metro side. Not sure if someone was on the tracks or something?”

“The First Police District and the United States Park Police were investigating an Armed Robbery which occurred today at approximately 4 PM in the area of 14th and K Streets, NW. During the course of that investigation, First Police District Detectives were able to gather information about a suspect vehicle that was used by the suspect to make good his escape. That vehicles description was broadcast over all police radio frequencies for units in the field to stop, hold all occupants and notify the First District Detectives Office when located. Additional information was gathered that led our Detectives to an address on Franklin Street, NE where the suspect vehicle was in fact located.

The assistance of the MPD Special Operations Division’s Helicopter Branch and K-9 Corps were instrumental in assisting uniformed patrol units and detectives in securing the scene. Three persons of interest were taken into custody and the suspect vehicle was removed from the scene pending a search warrant. The case is currently being investigated and handled by Detectives of the United States Park Police with the assistance from Detectives from the First Police District.

The First Police District would like to thank Captain Lanciano and all members of the Fifth Police District that supported our efforts in recovering this wanted vehicle and taking these suspects into custody without incident.”

Read more →
More Stories
“Riders should expect significant crowding aboard trains and at rail stations near Papal events.”House of the Day