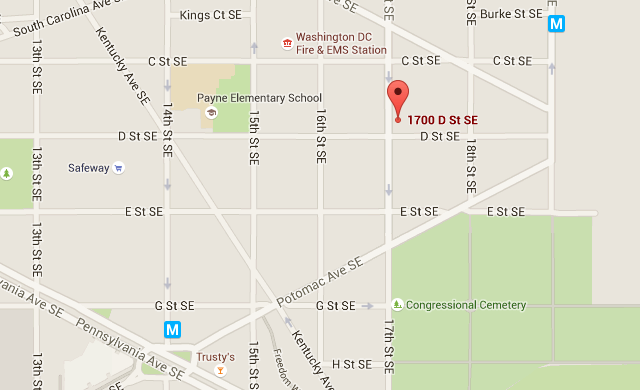 “On Thursday, April 27, 2015, at around 11:26PM, a citizen walking westbound in the 1700 block of D Street, Southeast, was approached from behind by (2) subjects, described as black males between 17-24 years old, thin build, wearing masks, who snatched her pocketbook off of her shoulder and began hitting her causing her to fall to the ground. During the struggle for the pocketbook, one of the subjects brandished a firearm.

After obtaining the pocketbook, both subjects ran to an alley off of D Street, Southeast.

This case is currently being investigated by the First District Investigative Unit.”

The victim described her experience on the Hill East listserv:

“Unfortunately, I was mugged at gunpoint tonight around 11:30 on the 1700 block of D Street SE as I was walking home from the Metro. I heard and then saw the two assailants running behind me. I wasn’t able to outrun them and fell to the ground as they grabbed my bag away from me. It was only then that I saw the gun. They hit me a few times (luckily, not very hard) and then ran away with my purse down the alley that is between 17th and 18th. I heard tires screeching shortly thereafter. Fortunately, I wasn’t physically injured more than a scrape to the knee when I feel. I am grateful for the kindness and concern of the neighbors down the street who let me come inside their home to use their phone to call the police and of my friends (also neighbors and parents to a newborn) who stayed with me as I was interviewed by the police and as we waited for the CSI. I am also grateful for the police who came quickly and were very professional and thorough.

On the off chance that you spot a discarded Coach black tote bag or a pair of women’s Asics Nimbus running shoes (that look like this.), please let me know! My running shoes with custom-made and brand new orthotics were inside my bag, and I doubt that the thieves have much use for them.

Stay safe! The police said that there have been several muggings recently as people have been walking home from the Stadium Armory metro.”