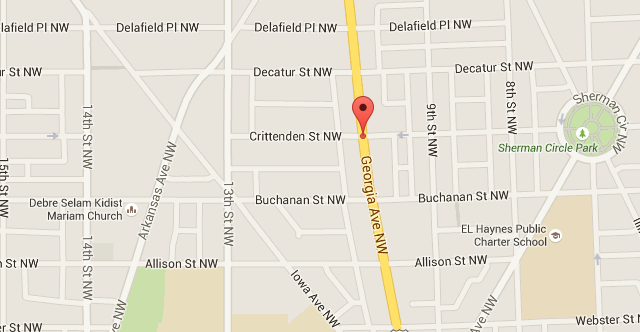 “Some kid, probably 17 – 20 years old just got shot on the 1200 block of Crittenden Street NW. I just happened to be walking south down Georgia Ave from the bus stop when the police swarmed the block. I counted 7 cars, 2 bike cops, 1 police motorcycle, 2 white shirts, and fire/ems both on the scene. The police told the crowd all they heard was a guy got shot, but is going to live. They just put the kid on the stretcher and wheeled him into the ambulance. Looks like he got shot in the front of his neck. He was conscious and looking around. This has to stop.”

“MPD is on the scene of a shooting in the 1200 block of Crittenden St. NW. No look out”

“On Friday, August 29 around 6:45 PM in the 1200 block of Crittenden Street, NW, MPD responded to the call for a shooting. Located was a victim suffering from a gunshot wound. The victim was transported to a local hospital for treatment. The injury sustained by the victim is non life threatening. There is no available lookout for the suspect at this time.”