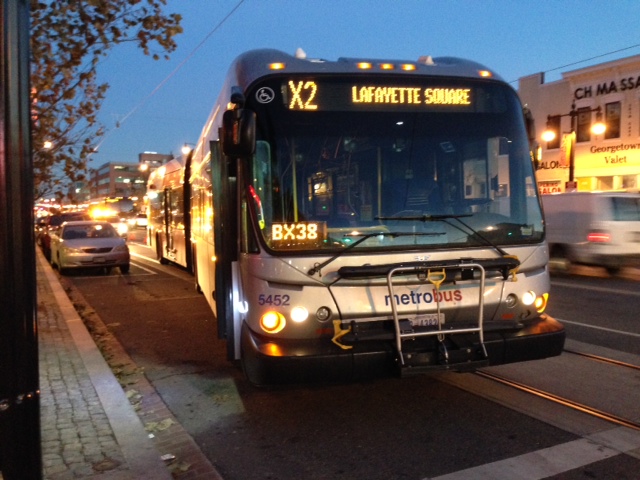 “As part of its ongoing effort to enhance the safety and security of bus operators and passengers, Metro plans to test the use of video monitors on board buses as a deterrent to prevent fare evasion and bus operator assaults. The move is part of a multi-layered response that also includes enhanced fare enforcement by plain clothes and uniformed Transit Police officers, outreach campaigns — including targeted outreach in public schools, the installation of plexiglass dividers to protect bus operators, and enhanced penalties for those found guilty of assault.

Video monitors will be installed on 22 articulated (60-foot) Metrobuses as part of the pilot program. The monitors will allow passengers to see exactly what the security cameras are recording in real time. One 8.4-inch screen will be installed above the bus operator so that riders can see themselves as they board, and one 19-inch screen will be mounted behind the driver facing the passenger cabin with a four-camera display of the bus interior.

“Metrobus operator assaults not only put our employees at risk, but also impact the safety of everyone else onboard the bus,” said Metro Interim General Manager and CEO Jack Requa. “Through this effort, we want to remind riders that all activity aboard our buses is captured by the cameras and see whether the presence of the new video monitors has an additional deterrent effect.”

The 22 selected buses are all assigned to the X2 route, which runs along H Street from Benning Road to Gallery Place and Lafayette Square. The route is among the system’s busiest with an average weekday ridership of 12,180 trips.

Four X2 bus operators have been assaulted in 2015, which is more incidents than any other route.

“Every Metrobus is equipped with multiple cameras, and those cameras are capturing activity on the bus — inside and out,” said Metro Transit Police Chief Ronald Pavlik. “Our hope is that showing riders what our cameras see will serve as a deterrent against crime, including assaults and fare evasion.”

Metro Transit Police have increased the number of officers on Metrobus routes in an effort to reduce operator assaults and cut down on fare evasion — the number one cause of disputes. In addition, over the last two years, Metro has been educating many young riders about safety on Metrobus through its “Respect Your Ride” safety outreach campaign. The Respect Your Ride initiative provides in-system and external communications for youth riders and other vested stakeholders in support of reducing incidents of violence and injuries on Metrobus.

The cost of the pilot is approximately $81,000, and Metro will evaluate the effectiveness of the security displays over several months before making a decision on a possible fleet-wide rollout.”