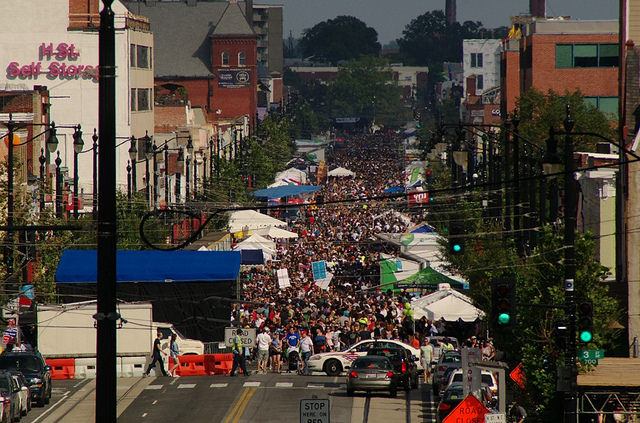 “H Street NE will celebrate the 10th annual H Street Festival on September 19, 2015. This year’s festival is sure to be one of the best, with activities, performances, restaurants and vendors spanning 10 blocks of H Street NE.

Organized by H Street Main Street, the H Street Festival is one of Washington DC’s most popular festivals. In fact, this year it was named both the Best Neighborhood Festival and the Best Festival in Washington, DC by the Washington City Paper. This year as we reflect on 10 years of festivals and the continued growth and development of the H Street NE Corridor, there’s more than ever to celebrate.

For our foodie festivalgoers, more than 175 local restaurants, vendors and food trucks will offer a abundance of food selections, including international cuisine, regional fare and much more. Attendees can also visit one of the many beer gardens featuring a wide array of libations from breweries and distilleries, or hop aboard the Big Bus parked outside of the Queen Vic for a double decker dining and drinking experience. We’ll also have the “Only On H” on full display at this year’s festival with over 50 H street businesses and restaurants featuring outdoor patios, displays and special deals that are sure to show attendees exactly what makes our area so special!

Festivalgoers who are in the mood for some tunes can catch performances from a variety of different types of musicians and bands, including Grammy Nominee Cheick Hamala Diabate, Black Masala, Jogo Project, Father’s Children, The Pocket, Lil Red and the Renegades, Rodney Henry and many more! We’ll also have a variety of visual and cultural performances, including a burlesque show, traditional dance performances from cultures all over the world and martial arts demonstrations. And those who just want to rock can head over to the DJ area and dance the day away.

Attractions? The H Street Festival has them! The CW’s Two Broke Girls will be sponsoring a Tea Cup Ride (9th & H Street) that is sure to be fun for all ages with cupcakes & tea extravaganza. Attendees are also invited to compete in or watch the annual pie, chili and burrito eating contests or the bad tattoo competition (10th Street Stage). And the fitness zone will offer yoga and fitness sessions throughout the day that festivalgoers are invited to participate in for free (9th ST Stage). For our families in attendance, the festival will feature a kids and family zone serving up kid-friendly entertainment and interactive events from start until close (9th & H Street).

The exemplary artistry of the H street NE Corridor and surrounding areas will be on full display at this year’s festival with artist installations, art cars, local crafts and live demonstrations. For those who have a passion for fashion, the Fashion Stage will kick off the annual District Fashion Week celebration with runway shows from area designers (10th Street Stage). There will also be a DCFW fashion house display featuring couture designs for sale from participating designers.