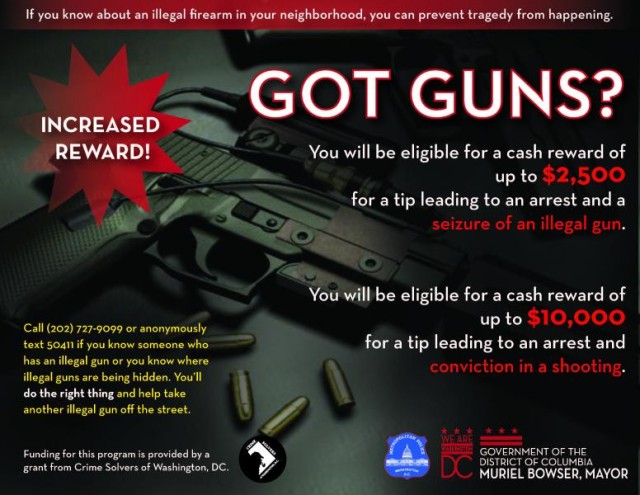 “Illegal firearms are responsible for most homicides in the District. And illegal guns continue to make their way into the hands of violent criminals,” said Mayor Bowser. “Our police department is making progress – but they cannot do it alone. Many of these illegal guns have high capacity magazines, which inflict maximum damage on victims, their families and our neighborhoods. With the public’s help, we can get illegal firearms off the streets.”

By helping MPD seize illegal guns, residents can help prevent more tragedies. Someone who would like to report an illegal gun, or who has information about ANY crime, should call 202.727.9099. When you call, you are not obligated to identify yourself. Alternatively, you can text an anonymous tip to 50411.

“Our actions are clear: we need to get illegal guns off the street so people aren’t put in harm’s way,” said Police Chief Lanier. “We are encouraging residents to step up and do the right thing by submitting tips that lead to the seizure of illegal guns.”

So far this year, MPD has taken 944 illegal guns off the street.”

A letter from the mayor announcing the new campaign:

“944. That’s how many illegal guns the Metropolitan Police Department has taken off the street this year. In the last 30 days, MPD seized 102 illegal guns, including 10 just last weekend.

Last week, MPD confiscated an UZI from a home where children were present. Two weeks before that, tragically, a three year old girl died because of an illegal gun in her home that was accessible to another child.

Illegal firearms are responsible for the vast majority of homicides in the District, as guns continue to make their way into the hands of violent criminals. MPD is working day and night to get these guns off the streets, where they don’t belong. They are making progress, but they can’t do it alone. There are still too many guns in our community and we need the public’s help to find them.

By helping us get guns off the street, you will help us prevent more tragedies. Together, we are stronger.