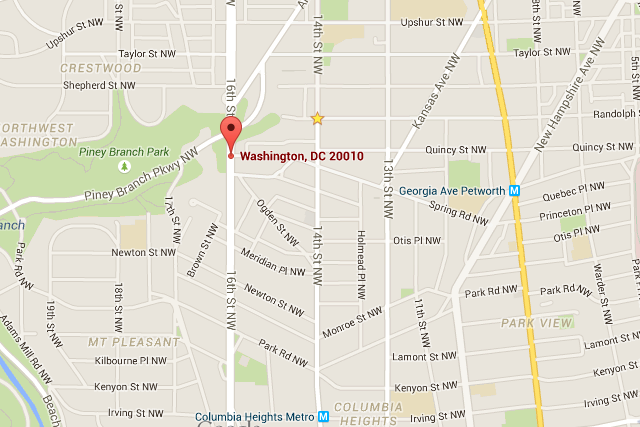 I wanted to give a head’s up to those who live in the Columbia Heights, Mt. Pleasant, and neighboring communities. At about 5:20 pm (or so) Wednesday, this man assaulted me at 16th and Spring NW. I was crossing 16th from east to west in the southbound crosswalk. Out of the corner of my eye, I saw him jog ahead as if he were running for the bus stop at the Woodner. I was headed in that direction myself, but because I was using a trolley cart, I stayed in the crosswalk to use the cut. Right after I made my turn to head south, I realized this guy was in front of me and he just stopped, keeping his back to me. I thought, “okay…whatever”, and made to move around him to his left. He then moved and purposefully blocked me again, still keeping his back to me. I said “Dude, move out of the way.” His yelled response essentially was “Don’t call me dude. Why should I move out of yourway, bitch?”

All I remember clearly was him being offended about me calling him dude and him calling me bitch. At this point, I pulled out my phone to call the cops and while I was trying to navigate to the emergency call screen, he grabbed my hand around my phone and squeezed hard. It’s over five hours later and I can still feel the pressure on my index finger and thumb joints. Luckily, someone who had crossed the street with us realized something not right was going down and asked if I needed assistance. I requested he call the cops, which he did.

The man holding me must have realized I was in no way going to be an easy target for whatever this was. He released me and started walking south on 16th. Since he had actually touched me, which I knew might qualify for some level of assault, there was no way I was letting him leave without getting his picture taken. I ran up beside him and snapped a few photos. The attached photo was the best I could get. I told him I was going to file charges and he said something like “You do that.” I fell back because I had a picture of him and I was in no way looking to engage with him further. He turned down the garage entrance driveway of the Woodner and that was the last I saw of him. I’m not sure if he lives in the Woodner, in a neighboring building, or if he was just using the cut-through I’ve been told is at the back of the Woodner parking lot.

The police responded very quickly and I filed a report with them. The primary thing at this point is that this man needs to be identified. If you recognize him and know his name or where he can be found, please contact MPD and give them that information. My case number is 15-124-907. The cops do have copies of the pictures I took. I showed his picture to the security guards at my building so they were aware of the incident and one recognized him from another incident. The security guard was also looking for this guy’s identity for that issue. This is obviously someone with issues and is causing problems in the neighborhood. Thanks for listening, and stay safe. If you don’t know who this guy is, but you see him on the street, stay as far away from him as you can. I have absolutely no idea what set him off, but he was very much the aggressor in this situation as I had no interaction with him at all prior to his stepping into my path and blocking my way.”

Read more →
More Stories
Police Car Collides with Car at Verizon Center, Drivers and Bud Truck in the Background are all OKPhotos from PoPville – The Road/The Path