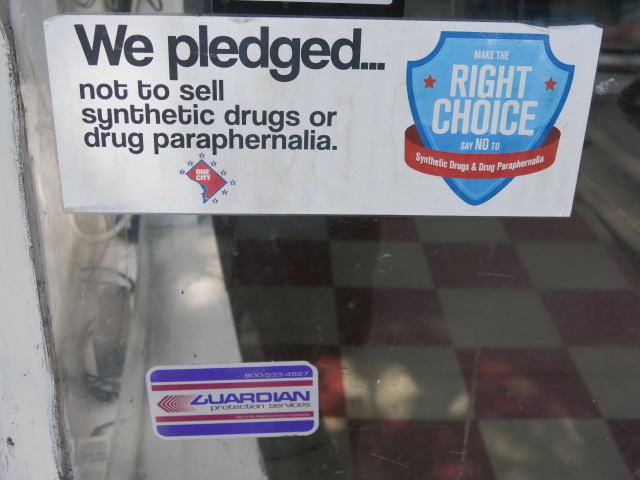 Thanks to all who sent emails about the DC Police Union’s Synthetic Marijuana: The Red Herring for DC’s Spike in Crime:

“After another violent week in D.C., five more people have been murdered, bringing this year’s total homicides to 84. The District is now on pace to see yearly totals we have not seen since 2008. The increasing murders aren’t the only problem. Both violent crime and property crime are following the same trends. The media has turned to the Chief and the Mayor for answers, and they’ll both tell you the same line: Synthetic marijuana is on the rise and causing unchecked violence. What they won’t show you is any data that supports that position. No arrest stats, no seizures of the nefarious product, no statistics showing how the rise in use correlates to the violence, or even that there’s any rise in use in the first place. They’ll just give you some anecdotal evidence of a handful of overdoses, an increase in ambulance trips to the ER, and some stories of bizarre behavior exhibited by users (which is akin to users of PCP―a notorious D.C. street drug). After describing the irrational actions of users, the administration then leaps to the conclusion that this is the reason that thefts, robberies, burglaries, assaults, and even murders are skyrocketing. So the question is this: How could these issues be so intertwined? Well, the D.C. Police Union doesn’t believe they are.

The story of synthetic marijuana as the catalyst for epidemic violence is a convenient one, but a fallacy none the less. What’s a more likely scenario? That MPD is understaffed and has been abruptly stripped of 125 officers who took a proactive, tactical and learned approach to making thousands of arrests per year, and now crime and violence is filling this new void? Or is it that some chemical sold in shady corner stores has turned the entire city into homicidal maniacs? You be the judge. And the next time someone tells you the problem is synthetic marijuana, ask for the stats and research. Don’t be deceived by this administration’s (Synthetic) Reefer Madness.”