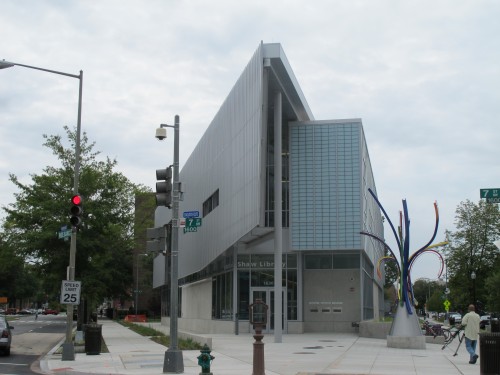 “On my walk to the Shaw Metro south station, I passed by the Shaw library. Right in front of the library’s sign, a woman was laying on the ground, on her side, her back against the sign. I could not see her face but her head was on her hand. She appeared motionless. I did a double take, because at first I thought she was sleeping there, but then I saw she was in work clothes — a nice pink and black dress with sheer tights — and her purse was tipped over on the ground next to her and her shoes were off, like kicked off.

I looked around to see if anyone else was alarmed by this, and no one seemed to notice, until one man asked another man nearby “Did that lady fall out?” They both kind of took a look and then shrugged and went about their business. I did not stick around either, thinking if she was part of some violence that I did not want to be around there to get involved, especially with all the gang related issues in my neighborhood lately, but I did call 911. The police showed up because they called me back to get more information on where exactly she was, although I was gone by then. So I don’t know if she was there when they showed up or what the resolution was, but I’d be eager to hear if others witnessed this.

Obviously, the bystander effect, myself included, is very real and very disturbing. Perhaps she just felt sick and laid down — but if you’re feeling sick enough to lay on the ground motionless with your belongings scattered everywhere, I still think that’s worth an emergency call and would hope someone would call for me if I was in that position…”