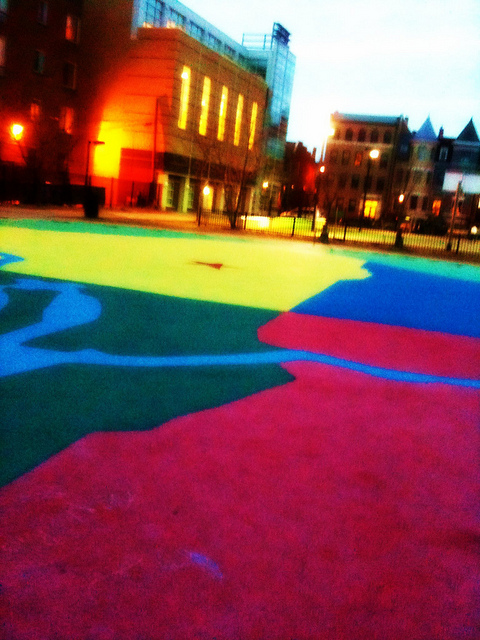 The mayor visited Columbia Heights last week for what our councilwoman billed as a public meeting “to discuss community concerns, including public safety.” Though it had been scheduled for some time, my wife and I were encouraged by the timing of the visit, coming so soon after the July 7 shoot-out at the Girard Street playground. Our three-year old daughter, numerous friends, and dozens of others – children, nannies, camp counselors – were at the playground that morning when the near-deadly incident occurred. It rattled us greatly, and we know we’re not alone feeling so unsettled by this and other recent violent activity in the neighborhood. We viewed the mayor’s visit as an important opportunity to engage with her and her staff. Unfortunately, the mayor’s outing was designed to limit public engagement to pre-scheduled appointments.

We also viewed the mayor’s visit as an opportunity for her to get an honest view of our neighborhood – both the good and the bad. From what I saw, she did not. It was a visit that was seemingly staged to the extent that it could have been a scene from the TV show, Parks and Rec. As such, it was a far cry from what we see on a daily basis. Some observations from the mayor’s time here:

The young men who regularly hang out on the sidewalk smoking weed and sitting on parked cars on the 1400 block of Girard Street were nowhere to be seen, and the block was – uncharacteristically for any Columbia Heights street – entirely free of litter.

When I (and others from the neighborhood) caught up to the Mayor and a cohort of senior officials from DPW, DPR and MPD on the playground, we could hardly hear her questions or their responses. Curiously enough for a 4:30pm on a Thursday, there was a very noisy, very visible and very timely street cleaning vehicle directly behind the Mayor where University Place meets Fairmont Street. Yellow-vested men on foot with brooms and shovels followed closely behind the truck, vigorously sweeping and disposing of litter. Wonderful to see, but definitely not the norm.

And speaking of litter, if you’ve ever been to the Girard Street Park – though beautiful as it is after its renovation – it is often plastered with it, especially on afternoons and weekends. (We held our daughter’s third birthday party there earlier this summer and knew enough to go at 8am to clean the park before guests arrived at 10:00am. We filled 5 trash bags.) The day of the Mayor’s visit, the park was spotless and there were young people actively sweeping throughout her time there. I can still see the look on the Mayor’s face when, perched on an elevated stand, she looked out over the park and said with a satisfied smile: “It’s just so clean.” Again, yes, wonderful to see, but definitely not the norm.

When the Mayor headed from the playground to the Rec Center for her by-appointment-only “office hours,” a group of young people congregating at the nearby tables broke into a hushed but beautiful singing of “God Bless America.”

A friend who lives across the street from the park told me that while the mayor was in the Rec Center, a DPR truck arrived to distribute goodies (scooters, etc.) for children, only to collect them again after she walked from the building to her car.

It was wonderful that the Mayor visited Columbia Heights and spent time walking our sidewalks, but how it was carried out leaves me wondering what it was meant to accomplish. Was it meant to check a box and provide talking points about attention paid to the neighborhood? Was it an opportunity to film B-roll of street sweepers in action over the Mayor’s shoulder? I’m hoping the rest of the Mayor’s walkabout wasn’t similarly as staged. When I exited the Columbia Heights metro at 4pm, the first people I saw were four young men sitting on the Five Guys windowsill looking so out of it that I doubt they could have told you their names if asked. Did the mayor see the same scene when she started her walk there at 3pm? Did she see the same volume of litter, the public urination, or the drug use that is a daily occurrence there?

On the whole, Columbia Heights is a wonderful neighborhood. I love it. It’s diverse and walkable, it’s lively and creative, and I knew more of my neighbors within the first three weeks of living here than I did in three years in my previous neighborhood. But if the Mayor wants to have a serious, non-theatrical view of our community – especially that two-block radius in and around the Girard Street Park that has been host to no fewer than three shootings in recent months – I hope the Mayor will plan to return unscheduled and unannounced.