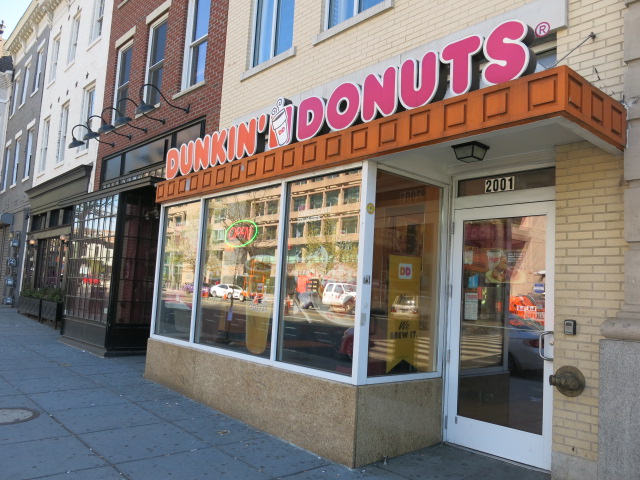 “This order was filed in the DC district court May 5 (see below for full PDF). Seems the Dunkin’ Donuts at 14th and U is at risk of losing its franchise for allegedly not paying franchise fees. My question/concern is: if Dunkin’ terminated the franchise agreement last month, but the place is still open, where on earth are the owners currently getting their donuts from?!”

Plaintiff Dunkin’ Donuts Franchising, LLC (“Dunkin’ Donuts”) brings this action against 14th Street Eatery, Inc., Mohammad Hoque, and Yasmin Parveen (collectively, the “Defendants”) for breach of contract and trademark infringement. Dunkin’ Donuts alleges that Defendants failed to pay franchise and other fees, and as a result Dunkin’ Donuts terminated the franchise agreement between the parties. Despite this termination, Defendants continue to operate an eatery holding itself out as a Dunkin’ Donuts franchise, thereby infringing Dunkin’ Donuts’ trademarks and violating the terms of a covenant not to compete. Before the Court is Dunkin’ Donuts’ motion for a preliminary injunction, which Defendants have failed to oppose. Upon consideration of the uncontested motion, the entire record, and for the following reasons, the motion is granted.

For the foregoing reasons, Dunkin’ Donuts’ Motion for a Preliminary Injunction is granted. Defendants are enjoined during the pendency of this matter from using Dunkin’ Donuts’ trademarks or operating a competing business within a five mile radius of the former franchise. Within 30 days, Defendants must file with the court a report in writing under oath setting forth in detail the manner and form in which the defendant has complied with the injunction.