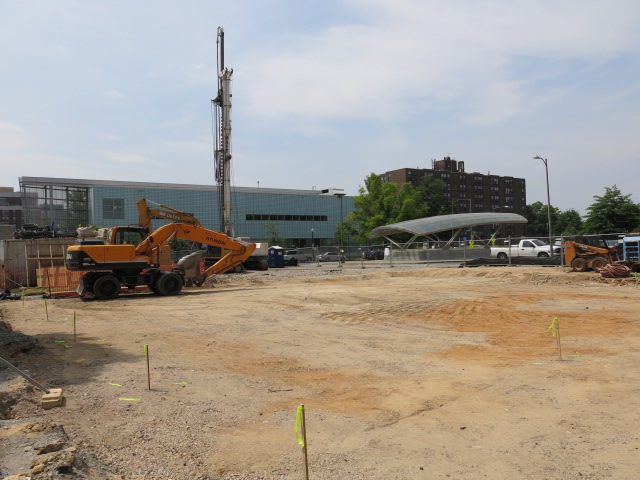 The new eight-story building at 1710 7th Street NW was designed by acclaimed architect Shalom Baranes Associates of Washington, DC, representing that firm’s foray into affordable housing design. The 56 apartment homes, which follow Enterprise Green Communities guidelines, will include 28 one-bedroom apartments; 21 two-bedroom apartments; and 7 three-bedroom apartments. Construction is slated for completion by mid-2016 and rental applications will be accepted beginning in January 2016.

The development of this much needed housing is only possible due to the unique four-decade interracial partnership of two D.C.-area United Church of Christ (UCC) churches: Westmoreland Congregational UCC and Lincoln Congregational Temple UCC. The two churches became housing development partners to invest in the Shaw neighborhood in the late sixties when few others would. Their successful development of affordable housing dates back to 1969, when they broke ground on the Lincoln Westmoreland Apartments, a 108-unit, 10-story affordable apartment building now located next door to Channing E. Phillips Homes. The building is currently undergoing a renovation scheduled for completion later this year. Lincoln Westmoreland Housing subsequently provided land for the Shaw-Howard University Metro station infrastructure, which has improved access and economic opportunity for neighborhood residents.

District of Columbia Council Member at-Large Elissa Silverman and Ward 6 Advisory Neighborhood Commissioner Alex Padro joined Polly Donaldson, director of the Districts Department of Housing and Community Development (DHCD), officials from the US Department of Housing and Urban Development, ministers from both congregations, the family of the late Rev. Channing E. Phillips and members of the development team for a unique program at the Watha T. Daniel/Shaw Library, directly across the street from the new building. Officials and team members assembled a giant vertical puzzle depicting the building piece by piece.

“Creating pathways to the middle class includes developing inclusive and diverse communities. To do this we must produce, protect and preserve more affordable housing for residents at all income levels,” said Polly Donaldson, DHCD Director. “The Shaw neighborhood is rich in culture, so being able to revitalize these properties will not only allow the city to preserve the existing 108 affordable units and build 56 new affordable units for DC residents, but make it possible for the neighborhood to maintain its history and character. Projects like these are an example of the positive impact the Mayor’s $100M commitment to affordable housing can have on the city, once those dollars are invested, ” she continued.

“A project such as this is only possible when all of the pieces of the puzzle come together: location, vision, people of good will, financial commitments, great design and stellar execution,” observed Lincoln Westmoreland Housing President David Jacobs. “It’s gratifying that after all of the years of groundwork, these badly needed homes will soon be available to our neighbors who need them,” he added.

The new building will bear the name of a beloved and avid anti-poverty and civil rights leader who fought for decent housing and social justice for all. Born in 1928, Channing Emery Phillips served as Senior Minister of the historic Lincoln Temple Congregational Church at 11th and R Streets NW in Washington, D.C and was committed to addressing the low-income housing crisis in the Nation’s Capital. In 1967, he began leading the Housing Development Corporation, a nonprofit company that became the largest single developer of low-income housing in the Washington metropolitan area during that era. Phillips became a national political figure in 1968, when he was nominated for President of the United States at the Democratic National Convention in Chicago, becoming the first African American nominated at a national convention of a major political party. Phillips died in 1987 at age 59 after a battle with cancer.”

More Stories
Your Afternoon Animal FixSignage Up for Esencias Panamenas, Authentic Panamanian Cuisine, and Joselyn restaurant/bar across the street