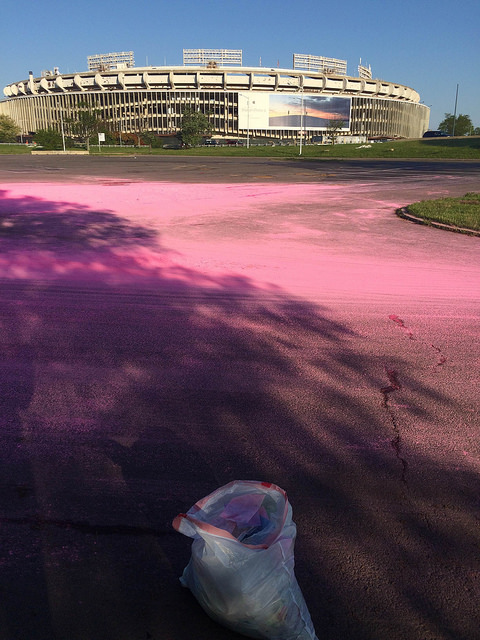 Earlier this spring, a color run was held at RFK Stadium, and hundreds of people showed up in bright white shirts to be doused in neon powder at each kilometer along the 5k course. This powder comes in clear plastic packets that race staff rip open and discard throughout the day. Later that day, as I rode my bike along the Anacostia Riverwalk Trail between the parking lots and the river, I noticed thousands of these empty plastic power packets littering the grass and blowing into the river. I wanted to believe that a cleaning crew was coming along later in the day, because I couldn’t accept that such negligence would have been tolerated by Events DC or the race coordinators. Additional cleaning crews did not come before wind carried these packets farther away.

On May 2nd, the “Color In Motion 5k Run” took place at the same venue. The event concluded by mid-day, and as we walked to the DC United soccer match that evening I noticed a disgustingly familiar sight along the paths. Hundreds of these plastic pouches were still strewn about the parking lot, adjacent lawns, and the riverwalk.

Participants in these races likely assume that their race fees cover clean-up costs, and it should. I’d like to believe people wouldn’t be signing up for something like this if they knew how much plastic from this event ended up in the Anacostia River, but this is beside the point. The groups organizing such events should not let this happen.

I’m a firm believer in taking action, so I donned some rubber gloves and spent two hours on Sunday morning picking up these neon powder packets. I filled two garbage bags, and hopefully got a majority of the remaining litter, but this is not my job.

I write this, not to complain about a single event or to be praised for picking up the trash, but as a call to action for the coordinators of upcoming fun runs and other events. Over the next four months, RFK Stadium will host another six color runs (including one this month) and the coordinators of such events need to be held accountable. Out of respect for the community, both the people living in and enjoying the neighboring areas, and for the wildlife that call the Anacostia and Kingman & Heritage Island Park their home, please help make a difference. Please help to drive accountability around these events!” 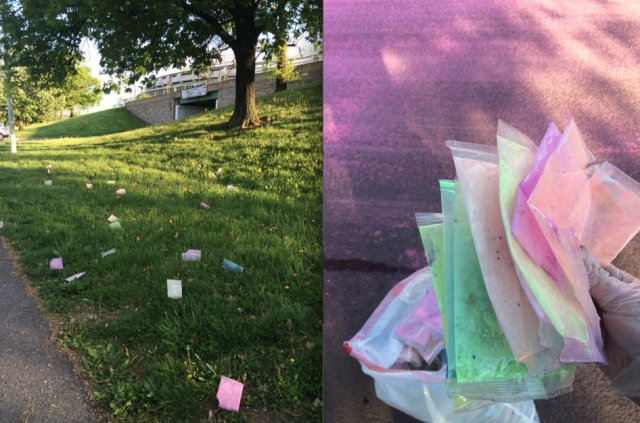