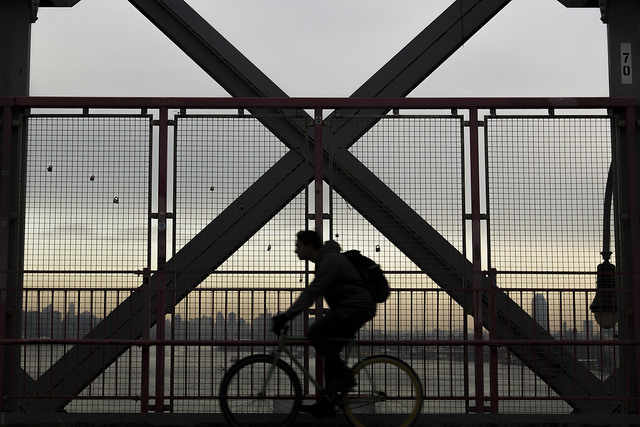 “The DC DMV should work with regional bicycling advocates to send information to all registered drivers about being mindful of bike lanes and the shared responsibility for safety, according to a letter sent from Ward 1 DC Councilmember Brianne K. Nadeau today, National Bike to Work Day.

The letter asks the DMV to work with the Washington Area Bicyclist Association and the D.C. Bicycle Advisory Council and would complement the work those organizations are doing to educate bicyclists about their role in being responsible commuters. The information could be included in already planned mailings such as annual registration notices, or sent as a standalone piece.

“Washington is a national leader in supporting bicycling infrastructure,” said Nadeau. “As biking to work grows in popularity, we need to ensure both drivers and bicyclists have all the information they need to help keep each other safe on the road. The DMV and bicycling advocates sending safety information to all registered drivers could go a long way to helping keep all the commuters who share our streets safe.”

The full text of the letter is below

Today is National Bike to Work Day, an occasion to celebrate bicycle commuting and draw attention to the many benefits of biking to work, including less traffic, cleaner air, and healthier residents.

The District of Columbia is nationally recognized as a leader in supporting bicycling infrastructure and our investment continues to expand the number of residents who use bikes regularly. The Washington metro area now has the second highest percentage of bicycle commuters of any major U.S. city. Just this week, it was rated by Time Magazine as the number two best city in the U.S. for biking to work.

With the growing number of bicyclists sharing the road with motorists, Bike to Work Day is also an occasion to remind drivers and bicycle commuters about safety.

Given your shared focus on safety, I request that the DMV work together with the Washington Area Bicyclist Association and the D.C. Bicycle Advisory Council to send a letter to all registered drivers in the District about being mindful of bike lanes and our shared responsibility for safety. This information could be included with already planned mailings such as annual registration notices or as a standalone piece. This letter would complement the existing work that these two organizations are doing to educate bicyclists about their role in being responsible commuters.

Many of the licensed drivers in the District never took our driver’s license test, or took the test before the more recent addition of bike lanes and the rise in bicycle commuters. The letter would serve as an important tool to increase the safety of bicyclists and drivers as we continue to invest in transportation infrastructure that encourages a range of commuting options.