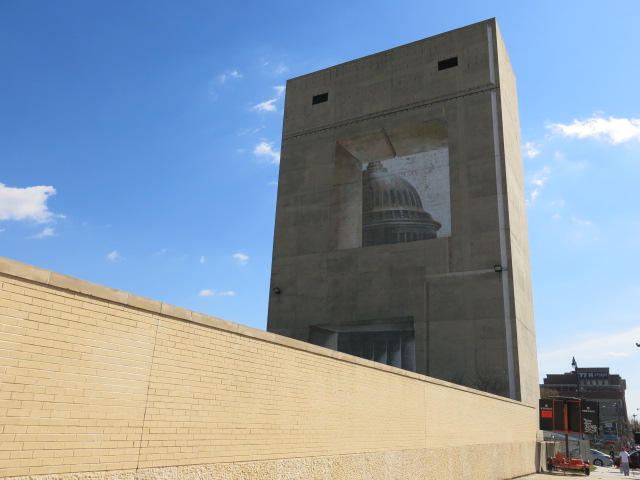 I used to get asked about this airshaft like clockwork every six months. From Legacy.com:

“On Friday, April 24, 2015, exhibits designer and painter, Val E. Lewton died of cancer. Born in Santa Monica, California, son of movie producer Val Lewton, and Ruth Knapp, Val had a successful career in the Washington, DC art world. He spent 32 years at the Smithsonian Institution, designing hundreds of exhibits, including the award-winning Louis Comfort Tiffany Exhibition. He retired as Chief of Design at the Smithsonian American Art Museum. Val continued to design exhibits as a consultant, working with a variety of museums, most notably The Phillips Collection. An artist since childhood, for over 50 years Val was known for painting urban landscapes of DC. He exhibited in galleries and has work represented in museum collections. Val’s extensive photographs reflect historical changes in the neighborhoods around Gallery Place and his public art projects include the “trompe l’oeil” airshaft mural at 3rd St. and Massachusetts Ave. NW, Washington, DC. Val was very active in supporting local arts including being president and founding member of The Studio Gallery. He penned illustrations for Smithsonian Magazine and published art critiques. He is well known for The Washington Review article, “Where Has All the Color Gone?” A dedicated runner, Val was president of the Beltway Striders. He ran over 20 marathons, including 8 Boston marathons. In his running career, Val’s best marathon time was 2 hours 43 minutes. A sailor since childhood, Val actively raced sail boats until the fall of 2014. Val is survived by his wife, Claudia Minicozzi, sons Christopher and Victor Lewton and their wives, stepchildren Bill, Alex and Regis Minicozzi and their spouses, and nine grandchildren. His marriage to Jean Kling ended in divorce. A memorial service will be held on Friday, May 8 at 3 p.m. at The Washington Ethical Society.”

Read more →
More Stories
Perry Row in Brookland – Tours Start Saturday“I write this, not to complain about a single event or to be praised for picking up the trash, but as a call to action”