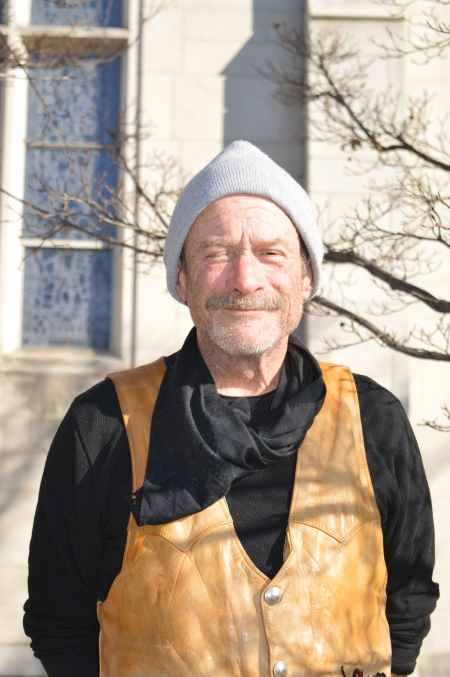 “I have bipolar disorder. In my past I lost my job for numerous reasons known as ‘being psycho.’ I was last working for a mental health center. I was staff, I wasn’t in for vocational rehabilitation. Long story short, I got fired. If I have mental disorder and a mental health center can’t keep me employed, who can?

This is my ninth time being homeless. I am on the streets. I find the shelter system and even the hypothermia shelters kind of volatile.

I have been at Adam’s Place primarily. Adam’s is way out there. I mean, there’s not even a bus that goes out there. So that’s a walk. And I get mental health care at a place called CareCo on Georgia Avenue, without bus fare – and keep in mind I’ll be carrying everything I own to and from the visit. I made about three visits and said this is enough.

It’s tough. From theft, to loss, to rain that dissolves pills. I had a vial [of medication], but it rained. Even with those little seals, there was enough rain in my bag that it destroyed the whole bottle. But I do try. In my early days, I was like, ‘I’m not mentally ill.’ In my first ten years I was treatment-resistant. Finally I owned up to the fact that I had an issue.

Imagine you’re without anything. You’re homeless. You’ve been out of the hospital. At that point you’re check to check. You don’t have money banked for six months’ rent. If you’re gone from your living situation for a month, which is usually the case, you lose everything you own. You’re evicted. You’ve lost your job. You’re back to square one. And all it takes is a month away.

Getting jobs was tough enough. Like, ‘Where were you the last month and a half?’ Well, I was in the shrink tank. Yeah right, we really want you. You can’t join the military. You can’t be a police officer. You can’t even get a gaming license, which means being a janitor at a casino.

I fought that for ten years, and I finally said enough’s enough. Trying to get jobs with a psychiatric history. And that’s been the story of why I’ve been homeless.”