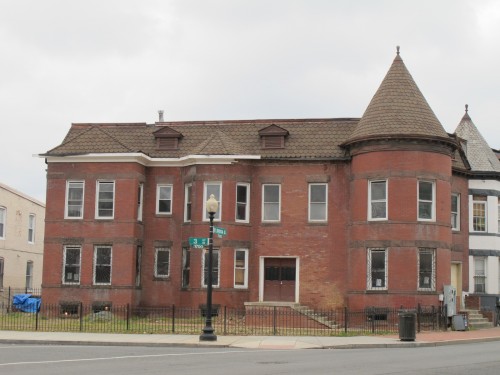 “Basque Bar, LLC” has secured a long-term lease on the vacant space at 300 Florida Ave NW with immediate plans to revive the building and property. The company has designated its trade name as “ANXO Cidery & Pintxos Bar” and plans to operate a restaurant, bar and cidery beginning in late 2015.

ANXO aims to reinvigorate interest in traditional cider, one of the Mid-Atlantic’s oldest drinks. ANXO will produce its own cider on-premises with the help of renowned cider-maker Kyle Sher- rer of Millstone Cellars. Natural fermentation in oak barrels will lead to a limited product that is notably different from the vast offerings ANXO will present from around the world.

Siblings Sam Fitz (former Beverage Director of Meridian Pint, Smoke & Barrel and Pizzeria Paradiso) and Rachel Fitz (former Assistant General Manager of Meridian Pint) will oversee the company, with Sam acting as General Manager. They are joined by co-founding partners Tim Prendergast (Beverage Director of Boundary Road), Cooper Sheehan (Beverage Director of The Big Stick), and Executive Chef Brad Walker (Executive Chef and Co-Owner of Boundary Road).
Chef Walker plans to honor the Basque culinary traditions of honesty, simplicity, and quality by showcasing local producers’ best efforts. The menu will feature pintxos (Basque small bites) as well as heartier dishes one might find at a ciderhouse. Sheehan will act as Bar Manager and will work with a small and dedicated staff behind a 25-seat bar on the main floor. Prendergast, as Bev- erage Director, will oversee an ambitious beverage program featuring 17 ciders on draft, and 25 additional draft lines dedicated to beer, wine, and cocktails. Prendergast will also work with Chef Walker to pair Basque cuisine with an extensive list of Basque cider bottles in a 40-seat dining room on the second floor.

ANXO will be a strengthening force in the growing Truxton Circle neighborhood. Michael Blake of bestudio architecture and designer Sarah Walker have been enlisted to seamlessly interweave improvements at 300 Florida Avenue with the surrounding historic community. All of us at ANXO look forward to welcoming our neighbors and cider enthusiasts alike.”