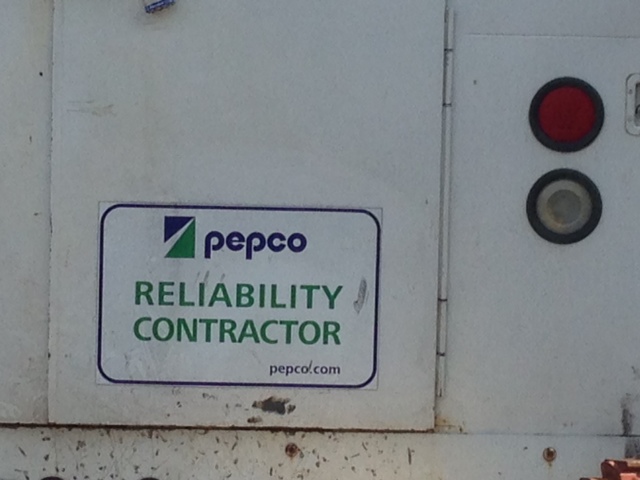 You can see the pepco outage map with estimated restoration times here.

“Any traffic signals that are out or flashing should be treated as a 4-way stop. Be courteous as this situation is remedied.”

“Shortly before 1 p.m. Tuesday we experienced a dip in voltage in the Washington D.C. area. This was caused by an issue with a transmission line.

There was never a loss of permanent electric supply to customers.

The dip in voltage caused equipment at some customer facilities to transfer to their backup systems.

The momentary outage occurred because of customer equipment responding to a dip in voltage.

We are currently working to repair the transmission equipment fault in Charles County, Maryland. We have crews on site investigating the cause.”

“We have a few rail stations on emergency lighting; however, all trains have power and are moving on all lines at this time. 12:48p #wmata”

“MTPD units responding to assist at all stations affected by power outages. No elevator entrapments reported at any station. #wmata”

“South exit of DuPont station. No lights, no escalators, no fare gates”

“A major power outage in DC is affecting some of our museums. @NPG, @americanart @airandspace and @SmithsonianNMAI are now evacuated”

“There seems to be a blackout at the Wilson Building. Insert @PepcoConnect @Exelon merger joke (pro or con!) here.”

“Power outages all over K Street NW, affecting many office buildings. Out since approximately 12:40p.”

“The Verizon center side of 7th is out, but the other side seems to still have power.”

“University of Maryland is completely out too.”

“power out in NoMa”

“power out in Foggy Bottom”

“power out in Navy Yard”

“IMF/GW is out of power”

“Power out at 5th and F st NW. Tons of fire trucks on the mall near the American Indian Museum #dc #washingtondc #poweroutage”

“Also extending out eastward to Prince George’s Community College in Largo and even southward into parts of Southern MD.”