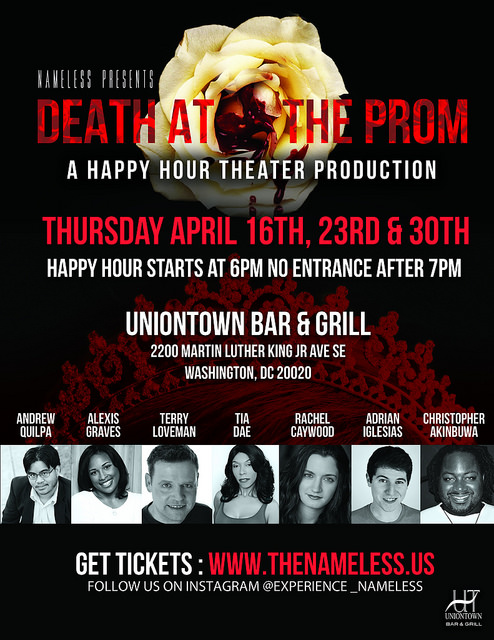 Nameless, a newly formed DC-based theater company, announces the premiere of Death at the Prom, a modern murder mystery comedy show. The site-specific production, takes place in the midst of a high school prom where disaster strikes. Attendees will gather clues, question suspects and bring the murderer to justice. Rather than observing the show from behind the safety of the fourth wall, Death at the Prom, catapults audiences from their seats and into the zany world of the show.

Uniontown Bar & Grill, one of only two sit down restaurants in the transitioning Anacostia neighborhood, will morph into the prom of Green Meadow High- a fictional school plagued with the typical student cliques, overworked teachers and an overzealous principal on a mission to reclaim the school. Nameless is thrilled to bring this theatrical event to the Anacostia neighborhood, which is also home to the Anacostia Arts Center.

Death at the Prom is the second installment of the company’s innovative series, Happy Hour Theater (HHT). HHT is a new after-work event where patrons are invited to experience theater in an unconventional way, during the familiar setting of ʻhappy hour’. In addition to enjoying drink and food specials, attendees will also benefit from a unique and quality theater experience at an affordable price.

Last Call, the company’s first installment of Happy Hour Theater, premiered June 2014 in Adams Morgan to sold out shows and received 5 star reviews. The return of the series is highly anticipated.

It’s the moment Green Meadow High students have been waiting their entire high school careers for – prom night! But before students can learn who has won the coveted Prom King & Queen crown, the elegant night takes a deadly turn. With tensions running high, it is up to Mr. Franklin, a timid History teacher, to muster the courage to catch a killer.

Nameless aims to reinvent the way audiences view theater. The company produces work that can exist freely outside the proverbial box, by creating art unconfined by traditional theater spaces and artistic norms. Nameless believes that theater should be accessible to all audiences and specifically targets the non-traditional theater goers. Further, Nameless does not aim to provide audiences with a great show, rather an unforgettable experience.”