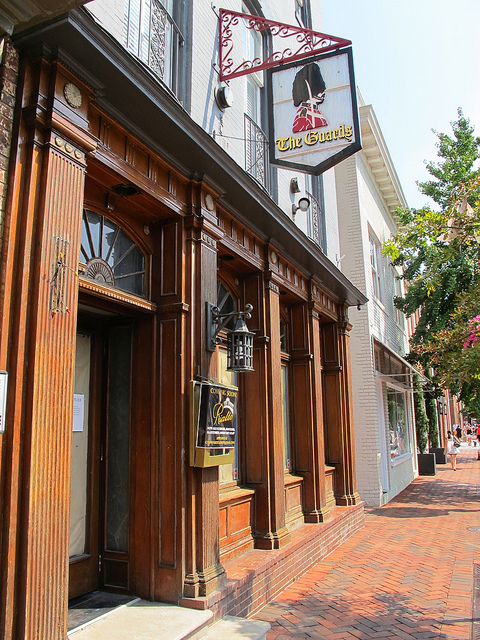 “The newest addition to M Street in Georgetown is Maxime – Steak Frites and Mussel Bar. Maxime will fill a much needed niche in Georgetown as one of the only casual French steakhouses and mussel bars, with an emphasis on dining simplicity—courtesy of restaurateurs Ben Kirane, Moe Idrissi, and Joe Idrissi, who also bring you Bodega and Thunder Burger. The name Maxime, often associated with a variety of French personalities, was actually chosen after its Latin translation for “special.”

Maxime will open Thursday March 26th and will occupy the former Guards space, located at 2915 M Street. Maxime looks forward to providing the neighborhood with an authentic brasserie atmosphere complete with French hors d’oeuvres – such as quiche, charcuterie and fromage alongside classic french onion soup, rustic bread, and a Belgian inspired list of specialty beers and cocktails.

The highlight of the menu created by Executive Corporate Chef Ryan Fichter will be the Steak Frites. This Maxime signature meal will be served with a special Maxime secret sauce, salad, frites, and a baguette breadbasket. Another noteworthy option is the broiled marinated Portobello mushroom steak and the salmon filet. This Maxime signature meal, also known as “La Formule” will be priced at $19.95.

Each French dish is prepared to be simple, yet exceptional. The goal is to satisfy customers with a “less is more” concept. Great care is given to the cuts of beef. Maxime strives to provide the best combination of flavor and tenderness along with specially prepared, hand-cut fries in large quantities. The menu will boast homemade desserts including tarts, crème brulee, and chocolate lava cake/moelleux au chocolat – a “must have” addition to any traditional French meal.

“Maxime will re-define the expectations of customers who are looking for exceptional and afforadble French cuisine, but in a more relaxed, informal atmosphere,” said owner Ben Kirane. “We want our customers to be frequent visitors who stop by for happy hour after class or work to enjoy a variety of beverages, excellent food, and friendly conversation, and then stay for dinner!”

The interior design and artwork throughout Maxime is a rustic, simplistic interpretation of French style, inspired by the French Revolution. From a beautifully crafted bar area complete with brick backing, to a fireplace at the focal point, Maxime leverages carefully placed mirrors among nostalgic black and white photos to set the stage of true French culture throughout the decades.

The wine and beer program furthers the theme of Maxime—simple, affordable, and fitting to the French inspired ambiance of “by the glass” offerings. The bar offerings includes fine wines such as Domaine De Cibadies, a pinot noir, and Trimbach, a pinot blanc, as well as 10 French-inspired draft beers. The most expensive bottle of wine remiains cost friendly, at less than $45.

Maxime will have a 75-seat dining room and a 100-seat private event room. The location at 2915 M St in Georgetown will be open for dinner daily from 4 PM to 11 PM. Brunch will be served Saturdays and Sundays, and is set to begin in a few weeks. Additionally, happy hour will be available nightly from 5 PM to 7 PM.”

Read more →
More Stories
Wegmans could still be coming to new Walter Reed DevelopmentDrink City: “a series of snapshots of people in the DC area who are invested in DC’s drinking culture” Vol. 1 – Dani Paulson from Copycat Co.