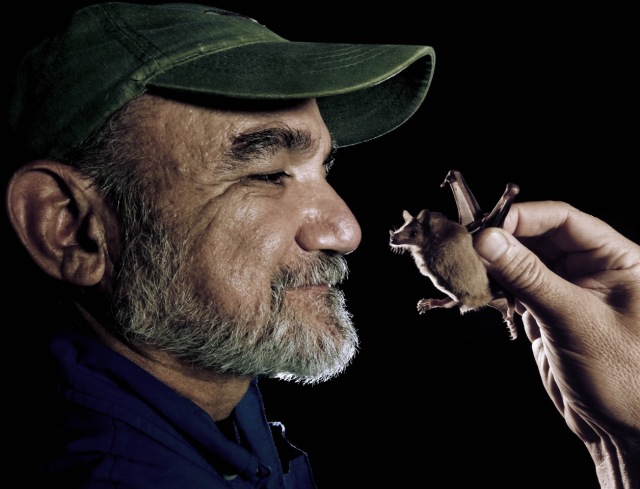 “The Bat Man of Mexico” courtesy of Environmental Film Festival

Unfortunately tonight’s Swedish Film, Bikes vs Cars, is already sold out but there are lots of other great films. From an email:

“We have LOTs of other programs that aren’t filled — over 160 films all across DC with 80 percent free. Our complete schedule is at www.dceff.org. Also attached is a picture from “The Bat Man of Mexico,” profiling Bat Man Rodrigo, who braves hurricanes, snakes, Mayan tombs and seas of cockroaches to track and save bats during their migration. It turns out that the bats that pollinate the plant that his favorite drink, Tequila, comes from, are in jeopardy. The screening of the film, with the Bat Man in person, will be on Sunday, March 22 at 1:15 p.m. at the National Museum of Natural History, Baird Auditorium, and it’s FREE.”

“The Environmental Film Festival in the Nation’s Capital, March 17- 29, is the largest and longest-running environmental film festival in the country and the largest film festival in Washington, D.C. The 23rd annual Festival presents over 160 films selected to provide fresh perspectives on a wide variety of environmental issues facing our planet. A special focus on “Climate Connections” explores the impact of climate change on our world. The 2015 Festival features cinematic work from 31 countries and 96 Washington, D.C., U.S. and World premieres.

Most screenings include discussion with filmmakers, environmental experts and cultural leaders. In addition to over 60 filmmakers who will present their film at the 2015 Festival, speakers will include environmentalist Jean-Michel Cousteau, climate scientist Joe Romm, actress Kristin Davis and Tommy Wells, the new Director of the District Department of the Environment.

The 2015 Festival inaugurates a new award: the William W. Warner Beautiful Swimmers Award, established in honor of William Warner, the Pulitzer Prize-winning author of Beautiful Swimmers, a study of the crabs and watermen on the Chesapeake Bay. This prize was won by documentarian George Butler’s new film, Tiger Tiger, spotlighting the endangered Royal Bengal Tiger.

The Festival’s Documentary Award for Environmental Advocacy goes to Academy Award-winner Louie Psihoyos’ latest film, Racing Extinction, an urgent call to action to stop the global mass extinction of animal species before it’s too late. Canadian filmmaker Sturla Gunnarsson’s Monsoon, exploring the vital importance of the annual rains that fall on India, is the winner of The Polly Krakora Award for Artistry in Film. The Eric Moe Sustainability Film Award is given to Silent River, about efforts to clean up Mexico’s polluted Santiago River by the investigative reporter-filmmaker team of Steve Fisher and Jason Jaacks. All award winners are Washington, D.C. premieres.

Oscar-winning French director Luc Jacquet (March of the Penguins) will present a retrospective of his films, including a Work-in-Progress, Ice & Sky, about French glaciologist Claude Lorius’ 60-year study of climate change in the glaciers of Antarctic. The Washington, D.C. premiere of Penguin Counters by local filmmakers Harriet and Peter Getzels explores how penguins in the Antarctic are dealing with climate change and the implications for humans. The Washington, D.C. premiere of Project Ice by local filmmaker William Kleinert examines the impact of diminishing Great Lakes ice on the heartland.

Filmmaker James Redford will show clips from his forthcoming film, Happening., telling positive stories about renewable energy solutions across the country. Director Jon Bowermaster will show a rough cut of his Work-in-Progress, Dear President Obama, Americans Against Fracking in One Voice, an appeal to elected officials to re-consider the consequences of hydraulic fracturing. The Burden highlights how the military is leading the fight for clean energy.

Opening night features the Washington, D.C. premiere of Bikes Vs. Cars, a Swedish film documenting the struggle of bicyclists in a society dominated by cars. On a similar topic, the U.S. premiere of the Dutch film, Bye Bye Car, explores the future of transportation. A special Festival Spotlight program presents the Washington, D.C. premiere of Planetary, a stunning visual portrait of our planet, followed by a multi-media Planetary Experience and celebration of the “Earth Hour,” a global show of support for earth’s ecosystem and climate.

The groundbreaking documentary, Cowspiracy: The Sustainability Secret, argues that animal agriculture is the most destructive industry on the planet. Seeds of Time explores efforts to protect the world’s food supply by saving the one resource we cannot live without: our seeds. Just Eat It: A Food Waste Story exposes the appalling waste in our food system.

Films about Latin America include Landfill Harmonic, the story of children from a Paraguayan slum who play instruments made from garbage in their “recycled orchestra”; Marmato, about the clash between globalized mining and a town in Colombia and the Washington, D.C. premiere of H20MX, examining the barriers between Mexico City’s 22 million people and a safe, reliable water supply; the U.S. premiere of Lago Enriquillo: A Prelude to Climate Change, evaluating the effects of climate change on the largest lake in the Antilles. A program on Cuba explores its vibrant coral reefs and considers the impact that lifting the U.S. embargo will have on the country’s pristine environment.

Wildlife films include Virunga, depicting efforts to protect critically endangered mountain gorillas in the Congo; Gardeners of Eden about one family’s attempt to save elephants in Kenya; The Messenger, highlighting the global decimation of songbirds and The Leopard in the Land, documenting an expedition across Mongolia’s Altai Mountains to support Snow Leopard conservation. Winners from the 2014 Wildscreen Film Festival will also be shown.

The role of religion in environmental protection is explored in the program, “Can Religion Save the Environment in China and Cambodia?,” which includes the screening of China: Searching for Sacred Mountain and Fight for Areng Valley, a New York Times Op- Doc. The Wisdom to Survive calls for humanity to confront climate change and protect earth’s life support system.
The Anacostia River: Making Connections about restoring D.C.’s Anacostia River and Green Roofs: Riversmart Rooftops are among short films telling local conservation stories, along with films about the Chesapeake Bay and farming in Virginia and Maryland. Short films on local topics will also be shown in collaboration with the inaugural Montgomery County GreenFest.

Impact films created to have a tangible effect at the personal and policy levels include Resistance, exposing the overuse of antibiotics, especially in farm animals, and the catastrophic implications for human health. RiverBlue serves as a rallying cry to the fashion industry to stop polluting rivers across the globe. Programs highlighting “Filmmakers as Catalysts for Change,” presented with The Climate Reality Project, and “Film as a Tool for Peace and Climate Change” include short films and discussion. The panel, “OK, I’ve Watched the Film, Now What?” further explores the topic of impact.

The Environmental Film Festival, now in its 23rd year, is the leading showcase for environmental film in the United States. Presented in collaboration with over 100 local, national and global organizations, the Festival is the largest film festival and one of the largest cooperative cultural events in Washington, D.C. Films are screened at over 55 venues throughout the Washington metropolitan area, including museums, embassies, libraries, universities and local theaters. Over 80 percent of programs are free.
For the complete schedule, visit the Festival website, www.dceff.org”