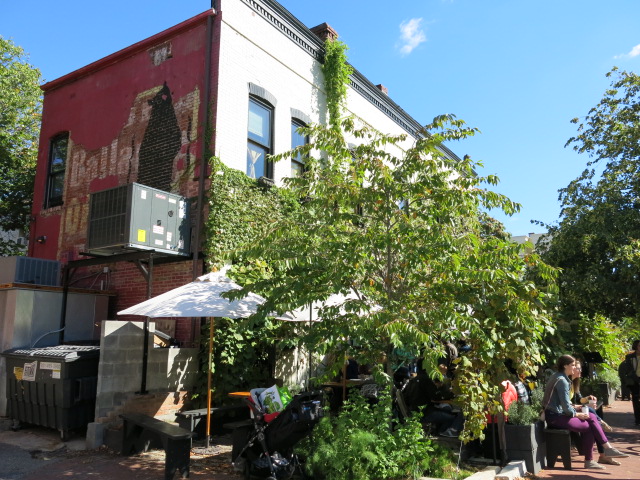 “Founded by Stu Davenport, and for the past seven years, Big Bear Café has been the Bloomingdale neighborhood spot for one of the area’s best cups of coffee or tea; breakfast or a homemade lunch, all served in a comfortable, welcoming environment or on the restaurant’s cobblestone patio surrounded by herb and flower gardens. Truly a ‘neighborhood’ spot, it has been involved in the founding of the area’s farmers’ market, community activities and social causes.

About two years ago, it began serving Chili in the evening, and has since grown its dinner menu utilizing the talents of some seriously pedigreed chefs. Fast forward to 2015, Big Bear Café is offering dinner Monday through Saturday, with plates that are stellar from product to presentation, a great selection of beer, wine and spirits, and a new James Beard nominated chef in the kitchen, front of the house manager and table service. The patio has also expanded to accommodate more diners (seats approximately 65-70).

Chef Quinten Frye, a James Beard Award semi-finalist, most recently in the kitchens of José Andres, along with General Manager Rob Elias have arrived at Big Bear. In the kitchen, Chef Frye brings a farm-to-table, nose-to-tail menu that changes almost daily. Examples of menu items include a variety of small plates, entreés, sides and desserts. From apps like smoked pork sausage with poblano and Serrano peppers, spicy mustard and house made kraut and trotter and Headcheese croquettes, and entreés that include faro risotto with Le Bocage Farms mushrooms, pecorino, preserved lemon, black garlic and dinosaur kale to a hearty bone-in pork chop with Brussels sprouts, kimchee apple salad and pork glaze, and sea trout with potato confit, charred kale, cippolinni onions and saba to name a few, dishes are always seasonal, based on product availability. Sausages are homemade; bacon and fish is house cured (chef has repurposed an antique refrigerator to do the job). Entreés run a reasonable $14-$26.

Along with Chef Frye comes General Manager Rob Elias, who has created an artisan cocktail, wine and beer list that perfectly pairs with the menu as well as planned Bloomingdale Farmers’ Market homemade shrub cocktails to come with the harvest. In the evening, the restaurant provides full table service. There is upscale cuisine and culinary talent, yet the restaurant remains a neighborhood oasis that is as unpretentious, socially conscious and cozy as ever.

Big Bear Café is located at 1700 First Street NW in Washington’s Bloomingdale neighborhood. It features both indoor and patio seating (spring/summer) and is open Monday-Thursday from 6 am to 9 pm; Friday and Saturday from 6 am-10 pm.”