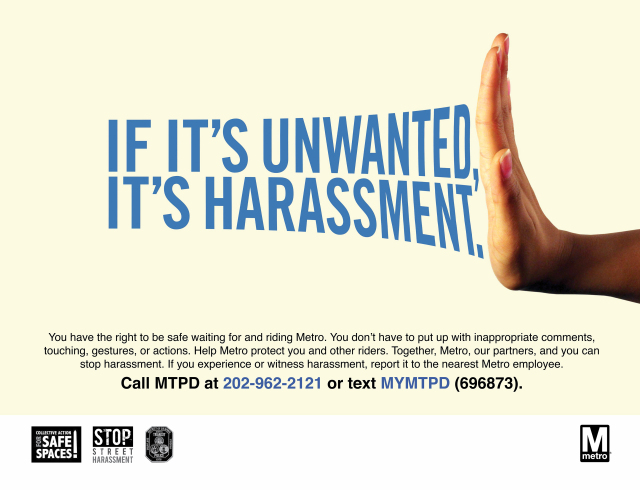 “Metro’s new anti-sexual harassment PSA is now on display across the Metro system. The ads mark the second phase of the campaign, which is designed to raise awareness that harassment of fellow riders is not tolerated on Metro.

“It is important to us that Metro be a safe space for our customers,” said Metro Transit Police Chief, Ronald Pavlik. “People have the right to travel without being harassed or intimidated by anyone, and we want to put would-be perpetrators on notice that we will pursue any allegation that is brought to our attention.”

The ads feature hands representing different races and genders to illustrate that harassment is not exclusive to any one group or sex. The concept was developed in collaboration with advocacy groups Collective Action for Safe Spaces (CASS) and Stop Street Harassment, who have worked closely with Metro on this issue.

“Harassment and assault on the Metro is never okay,” said Zosia Sztykowski, Co-Executive Director at Collective Action for Safe Spaces. “Raising awareness about it and about the resources available to people who experience it is an important part of creating a Metro system that’s safe and welcoming for everyone.”

Last year, reports of harassment on Metro declined 13 percent, as compared to 2013.

Any customer who is harassed, threatened or assaulted is urged to report it to Transit Police immediately: