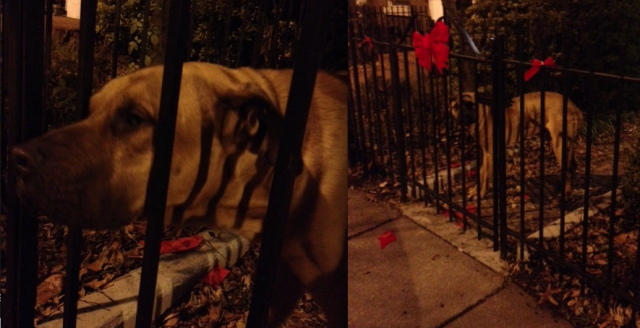 “I arrived home to my house on the 1600 block of 4th Street NW last night and found this sweet, big boy stuck in my front yard. He seemed to have wandered up my walkway and somehow closed the gate behind him. According to my neighbor, it happened at around 9 pm (she heard him barking). We called animal control because none of us could keep him with our existing pets. He looked intimidating but was quite a softy. He isn’t neutered and although he looked like he had cataracts, the animal control officer guessed that he is young.

We are trying to track down his home if he has one; we did confirm today that he isn’t microchipped.. If anyone in Truxton Circle/Bloomingdale/Shaw recognizes him, he’s at the New York Ave shelter.

We are also sending to Lost and Found dogs FB.”

Read more →
More Stories
This Might Very Well Kill You But May Be Worth It Anyway96% of NoMa Residents have College Degrees or Higher(?)