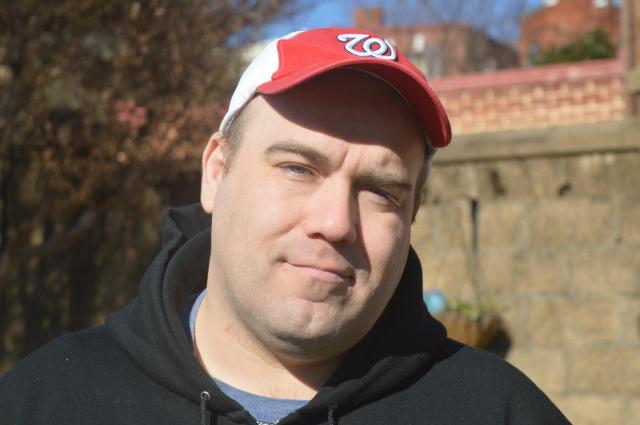 “By the time I got to D.C., I had been homeless for nearly a year and I was a lot sicker than I was when I first became homeless. I was really becoming what you think of when you think of a stereotypical homeless person – dirty clothes, scraggly beard, greasy hair, smell vaguely of urine, sitting on a park bench talking to invisible people. We see people like that all the time, especially in big cities, and we’ll think to ourselves, “That’s a darn shame, somebody should do something about that!” but that somebody is never us. I think we really have a tendency to write those people off. Nobody deserves to be written off. Every single one of those people is just like me. They just need some help and haven’t gotten it yet.

And I didn’t get it – I spent over a year just sitting on a park bench on Pennsylvania Avenue day and night, basically waiting to die. And I think a lot of people in that situation, chronically homeless people, have given up. Folks think they’re lazy. It’s not that they’re lazy, they’re lost. They’ve tried to get off the streets over and over again and they’ve failed over and over again and everyone’s given up on them so they just give up on themselves.

I’d probably still be out there or I’d be dead if it wasn’t for the fact that I got lucky and got arrested. It doesn’t sound very lucky, and it isn’t usually for homeless people. Homeless people usually get arrested for these little quality of life crimes – you might get fined or locked up, and then when you get out you’re back to being homeless again, but now you have a record so it’s even harder to get a job, or services, or housing. But for me it was lucky because they were out of public defenders so they gave me a private attorney that knew the judge and the prosecutor. He said “This guy’s not a criminal, he just needs some help.” So they released me with some conditions: One was I had to go to a shelter. The other stipulation was that I had to see someone about my mental illness. I ended up at  Green Door – Independence for People with Mental Illness, which is a private provider here in D.C., but you can use the money the district would be spending on you at the department of mental health. That was in November of 2006, and I’ve been with them ever since.