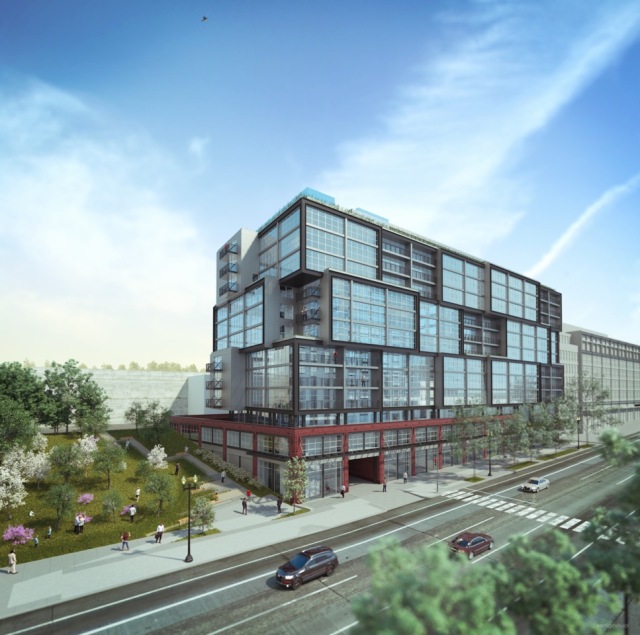 “Level 2 Development, LLC (Level 2) filed a Planned Unit Development (PUD) Application with the Zoning Commission for their latest project, The Highline at Union Market, a 315 unit mixed-use apartment building with 8,472 square feet of retail at the front steps to the burgeoning Union Market district in Washington, DC. Located one block from the NoMa/Gallaudet Red Line Metro Station at 320 Florida Ave., NE, The Highline at Union Market will connect the NoMa and Union Market neighborhoods. The project is a joint venture of Level 2 Development and Clark Enterprises, Inc.

Designed by Eric Colbert & Associates, the modern-industrial architectural design integrates warehouse-style windows with industrial-framed glass cubes that weave in and out of the Florida Avenue façade at varying depths. “We set out to design a building that considered the adjacent rail uses as well as the industrial and commercial uses of Union Market, drawing on inspiration from New York City’s High Line and Meatpacking District,” said Level 2 Principal David Franco. Other unique elements of the design include materials reminiscent of rail cars, and steel columns that echo the riveted steel supports of the nearby railroad underpass.

The PUD offers a range of public benefits, including a proposed green space and public plaza at the adjacent D.C. Government-owned land. Level 2 received votes in support of its conceptual plans for these landscape improvements from Advisory Neighborhood Commissions (ANCs) 5D and 6C. ANC 5D stated in its letter of support that “the proposed improvements to the District-owned land would greatly contribute to the safety and connectivity of the Union Market and NoMa neighborhoods, and will serve as a much needed improvement to the land, which is currently overgrown, littered with trash, and generally neglected.” Level 2 Development plans to continue to work closely with the community and Office of Planning during the PUD process.

In addition, the PUD expands housing opportunities in the Union Market area, offering 8% of the residential square feet as affordable dwelling units.

The transit-oriented project will include sustainable features equivalent to LEED Silver, including a green roof, bioretention facility, energy-efficient building design, and 105 bicycle parking spaces for residents and employees.

“Union Market is a special place with rich history and we are excited to be a part of it,” said Jeff Blum, Level 2 Principal.