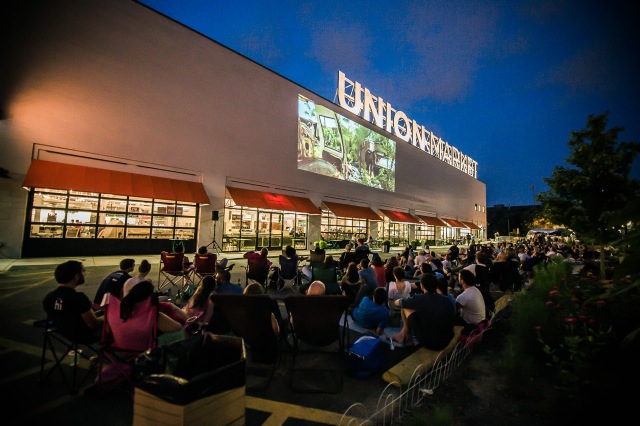 Union Market, home to the highly acclaimed food market, will bring back its wildly popular Drive-In series this Fall. The series will kick off on Friday, October 10 at 8:00 p.m. with an outdoor screening of the 2013 Disney hit, “Monsters University”.
The throwback, classic American treat will take place in the market’s parking lot, projected on the three-story front wall. The family-friendly series is just $10 per car (purchased here) or free for walk-ups in the picnic area. Free seating arrangements are first come, first serve. Patrons can bundle up in the comfort of their vehicle and adjust movie sounds through the car radio, with the tune-in number released at the start of the festivities.
Union Market’s Drive-In series has left its mark on the DC area since its inception in the summer of 2012. The highly anticipated yearly event offers a hub for communal fun, tasty treats and nostalgic flair.
The theme for this Fall’s Drive-In Series honors the idea of homecoming, featuring films that chronicle the highs and lows of the back-to-school season. The series will come to an end on October 31, with a special Peoples Choice Halloween edition, providing movie-goers the chance to cast their film of choice by voting via Facebook & Twitter. Union Market’s Halloween screening will integrate spooktacular surprises for children and the young-at-heart, featuring indoor trick-or-treating, costume contests and drink specials.
Cinephiles and vintage kitsch romantics will come together to enjoy retro service by the DC Rollergirls, on-hand delivering snacks and drinks on wheels. All 40 Union Market vendors will open for service during the festivities, and Timber Pizza Co will return as the Drive-In food truck partner-of-choice.