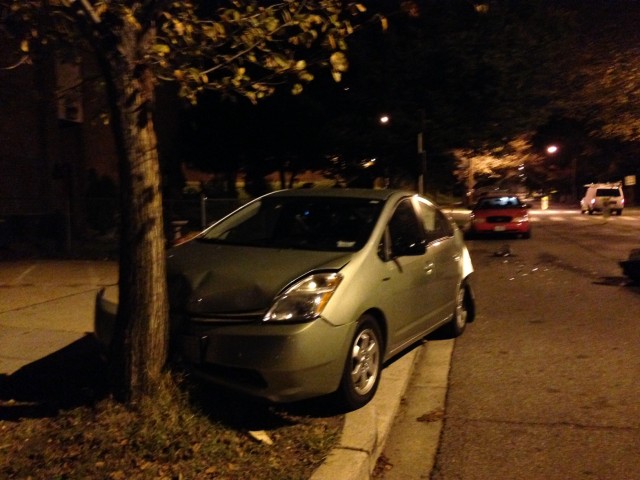 There was yet another crash on the 4500 block of Arkansas Avenue last night. Our neighbor’s car was crashed into by an SUV, pushed 20+ feet off the curb onto the sidewalk and ultimately into a tree.

The SUV that caused the crash fled the scene leaving debris all over the street and police took over an hour to respond to the 911 call. When they did, they were unable to run the license plate due to a broken computer.

This is the latest in an ongoing pattern of crashes on our street made possible by unsafe traffic conditions, which was covered extensively in the news this spring and summer. DDOT made safety recommendations which have not been implemented, and the city has refused to eliminate the rush hour lane which encourages speeding on our residential street. We have been given no support in resolving this issue.

The family whose car was totaled last night has two young kids, and there have been others who’ve been gravely injured. I’m just a concerned neighbor who is trying to spread the word.

More information about our campaign to make our street safer is available here.”