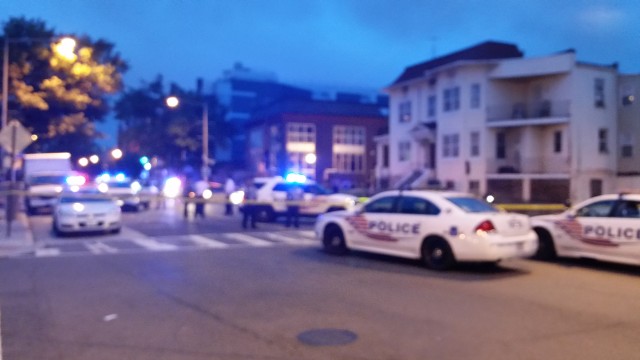 Thanks to all who sent emails and tweets. From MPD:

“Around 5:30 pm, units received a call for a man down in the 3400 blk of 14th St NW. Upon arrival, an adult male was located suffering from an apparent stab wound. The male was transported to an area hospital where he has been pronounced. This case is being investigated by Detectives with the Homicide Branch. The 3400 blk of 14th St NW is temporarily closed to vehicular and pedestrian traffic.

“Detectives from the Metropolitan Police Department’s Homicide Branch are investigating a homicide which occurred in the 3400 block of 14th Street, NW.

On Friday, October 3, 2014 at approximately 5:33 pm, members of the Fourth District responded to a call for a man down. Upon arrival, they located the victim, 35-year-old Kenneth Young Jr. of Northwest, DC suffering from an apparent stab wound. He was transported to a local hospital, where he was pronounced dead.”