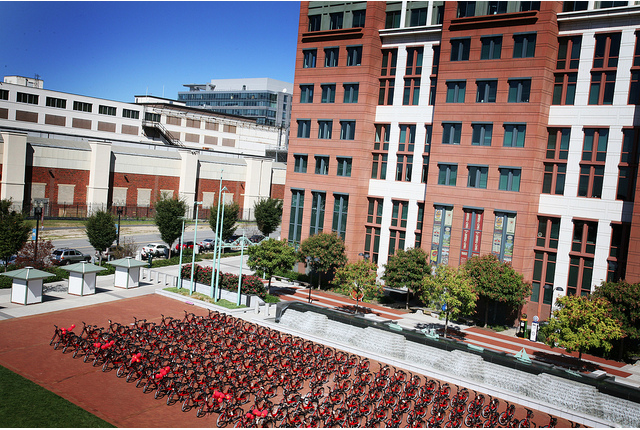 Yesterday, around 6pm I was almost finished with my run (on New Jersey Ave SE a little past the Capitol when I encountered about 7-8 adults on Capital Bikeshare. We went through an intersection together and then they started riding on the narrow sidewalk. They were struggling to get going, riding slowly and wobbling. I was running at their pace, if not faster so I went to the left of them to go around and next thing I knew I was flying through the air! One of them hit me.

I ended up on the ground and crashed into dirt/tree. I got up in shock and the first thing the forty-something year old man said to me was “You have to let me through!” First of all, he was riding so slowly and almost like he didn’t know how to ride a bike. Secondly, I said to him “It’s illegal to ride bikes on the sidewalk!” He just shook his head acting like it was my fault and never even asked if I was okay. Lastly, even if they are on the sidewalk don’t they have to yield to pedestrians?

After I looked at myself I realized my knee was cut up, bleeding, and swollen. Then I looked at my iPhone and the screen was completely shattered. I thought to myself what should I do, but I was so shaken up I just went home. I ended up having to replace my iPhone for $285 because a small part of the frame was bent.

Long story short, I kind of regretted not calling the police. But then I thought they have better things to do and I am not sure if they could have even done anything. Should I have called the police and is it illegal to ride bikes on the sidewalks in DC, or just certain parts?”

Read more →
More Stories
Drink for Free on your Birthday at Lyman’s Tavern!!Photos from PoPville – Coffee and Crazy Comrades