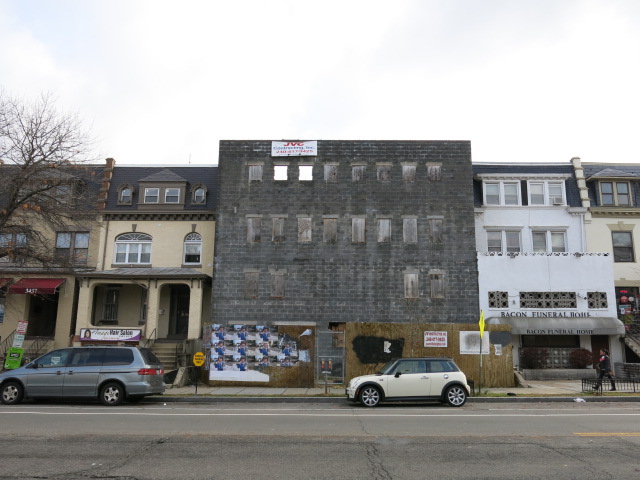 Four robberies in the Columbia Heights area may be linked.

Fran’s Hair Salon (14th and Ogden Street) was robbed at gunpoint in late July by two African-American males @5pm on a Thursday.
A tailor in the same area was bound, beaten and robbed in his place of business.
Miss Hair Braiding Salon (14th and Meridian Place, across the street) was robbed at gunpoint by an African-American female Thursday August 21 at @5pm.
A general store next to Bacon Funeral home (also on 14th Street near Meridian) was robbed by two African-American males on @5pm Saturday August 23. A woman who worked in the store was attacked and injured and taken away by ambulance. Store owners believe all robberies are related and involve all the same group of people.

While police have become involved, no arrests have been made or any leads established. Store owners in the area believe the robberies will continue until this group is caught.

The common denominator for all the locations is that they occurred during or near the weekend, @5pm, within a city block of each other, and involved stores that would have cash on hand at the end of the day.

Leads on the identity of this group are being sought, and someone may have important information regarding these robberies. Also, the general public needs to be alerted for the sake of safety (particularly with autumn and winter coming).”

Read more →
More Stories
From the Forum – TGI Fridays Delay and Auto DetailingTues. Afternoon Rental Option – Too Good to be True in Georgetown?