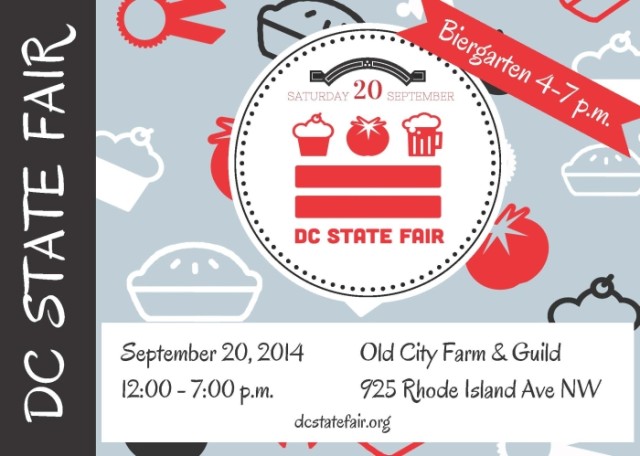 “The fifth annual DC State Fair will be held on September 20, 2014 from 12PM to 7PM at the Old City Farm and Guild located at 925 Rhode Island Ave NW.

The DC State Fair is partnering this year with the Homegrown DC Fair to put on an event showcasing the District’s food and artistic talent. Various contests will be held during the Fair, including: pie baking, funkiest-looking vegetable, honey, and pickled foods. Last year’s bike accessory contest winner was a child’s seat add-on for the Capital Bikeshare bicycles. New for this year is an ice cream contest where the District’s residents can show off their home-made ice cream and gelato. The popular homebrew contest will be held later this Fall.

“This city is full of talented people with interesting hobbies,” said Amelia Showalter, DC State Fair’s Board President and one of its co-founders. “From cooking and canning to agriculture and crafts, we want to give DC residents an opportunity to show off their skills– just like at county and state fairs elsewhere in the country.”

Frank Asher, the executive director and owner of Old City Farm and Guild, welcomes the DC State Fair. “We have been called, ‘the green beating heart of the Shaw community.’ What better place to have our DC State Fair fulfill its mission!” he said. Local DC vendors will be present to showcase and sell their creations, including food, soda, craft beer, sweets, and local merchandise. DC State Fair will be joined by the Homegrown DC festival (3-7pm), when hyper-local farmers will sell their fruits and vegetables.

Throughout the day, attendees will be able to watch mainstage events including judgment of DC State Fair contests and the announcement of winners.”

more stories
Previous
&pizza coming to Rosebar space (formerly Current Sushi) on Connecticut Ave and Chinatown Too
Next
Real Estate Listings In D.C. and Inside the Beltway