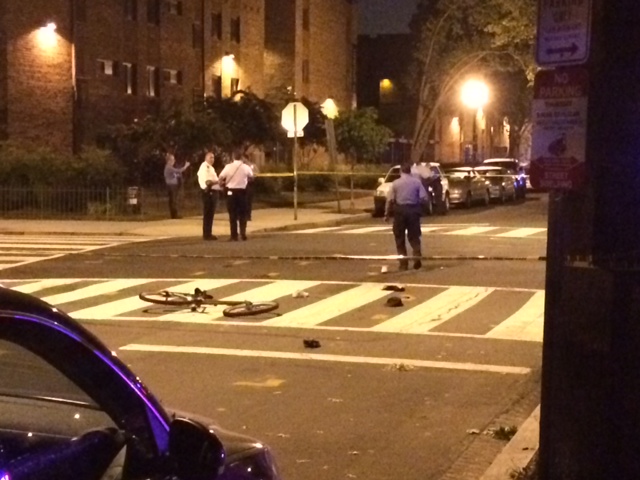 “We didn’t see it happen but we heard tire squeals and screams and saw them load the victim’s body in the ambulance. Not 100% on the happenings but from what we were told by police a bicyclist was killed by a hit and run driver last night at the intersection of 8 and s st nw at 2:20am.”

“Detectives from the Metropolitan Police Department’s Major Crash Unit are investigating a hit and run that resulted in a traffic fatality which occurred at the intersection of 8th and S Streets, NW.

On Saturday, September 20, 2014, at approximately 2:33 am, a bicyclist was on 8th Street, NW when she was struck by a light colored SUV that was traveling southbound on 8th Street, NW. DC Fire and Emergency Medical Services personnel transported the victim to a local hospital where she was pronounced dead. The striking vehicle was last seen fleeing southbound on 8th Street towards Rhode Island Avenue, NW. The SUV may have damage to the right front bumper.

The decedent has been identified as 53 year-old Tonya Reaves of Northeast, Washington, DC.

This crash is currently under investigation.