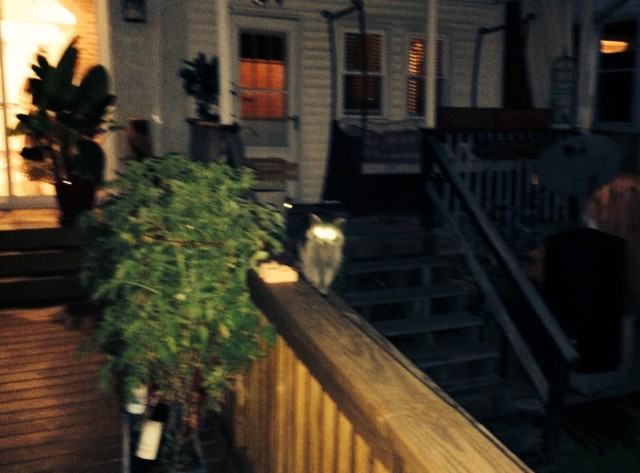 My wife and I came home from the weekend away to find that all but one of the peach-sized apples growing in our backyard apple tree were gone. About a dozen or so were taken – the only one remaining looks like a worm got into it. Our backyard is enclosed by an 8-foot brick wall on all sides, so it would be quite an effort for a person to scale just to get some apples, but the disappearance of all but the worm-eaten apple is consistent with a human thief. We can’t imagine a squirrel or a bird could have taken them all, but is it possible that a raccoon or a fox or some other varmint might have done so? Any animals that would be likely to make off with so many? Any birds that could have done it?”

And speaking of racoons another reader asks:

“Labor Day raccoon sighting in Petworth near the Soldiers Home. Not pictured are two other large raccoons whom also shimmied down the neighbor’s downspout from the roof and to the the fence highway in the alley. They are not afraid of humans, and I swear one tried to snag a tomato. I’m afraid some trash issues in the alley may be attracting them. Any one have similar encounters? Should we call 311 or the non-profit City Wildlife?”

Ed. Note: I don’t think the District does anything about racoons (or possoms). You could call a private trapper like Adcock’s who I’ve used in the past. Anyone noticing more racoons than normal this year?